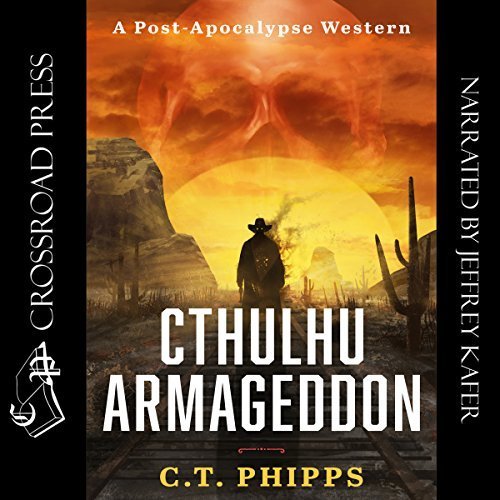 A super eclectic novel, but it works

The narration for Cthulhu Armageddon was done by Jeffrey Kafer.  If you are reading this and like audiobooks, you’d better know that name! If not, you have some catching up to do.  Kafer is perfect for this role, and he absolutely crushes the toughness of the character while still being able to finesse the many new and unique words that Phipps sprinkles in.

Cthulhu Armageddon was an interesting book.  It felt like it was all over the place but at the same time, it knew exactly what it was.  It was part Western, part Post-Apocalyptic, and part Mythological/Fantasy.  And yet, it works.  Phipps is able to create a world that is huge and vast in both size and complexity.  There are demons and ghouls and monsters and at the same time, there are still typical human issues going on.

The way that Cthulhu Armageddon’s was written was really enjoyable for me.  I could tell that I was being given some background information on the main character.  I could tell that we were building to a climax, and the climax was a little longer than I’d expected.  Making the overall book feel really well paced and planned out.

The main characters in Cthulhu Armageddon are great.  I don’t want to get too much into them, but I think you’ll understand what I mean.  The creatures, demons, etc. that Phipps has made were drawn from other sources of demon-like texts and I feel like he also made some of them up on his own.  They were absolutely crazy, a little scary, and even though these type of characters aren’t really my thing I still found myself enjoying them.

Overall, even though the story is one of the most eclectic collections of genres I’ve ever read, I still found myself enjoying it.  I read almost all of it in one day and only had to stop a few times to give my brain a break.  If you enjoy any of the genres that I listed throughout this review, I think that you will enjoy Cthulhu Armageddon. 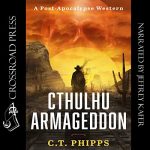 Cthulhu Armageddon is the story of a world 100 years past the rise of the Old Ones which has been reduced to a giant monster-filled desert and pockets of human survivors (along with Deep Ones, ghouls, and other “talking” monsters).

John Henry Booth is a ranger of one of the largest remaining city-states when he’s exiled for his group’s massacre and the suspicion that he’s “tainted”. Escaping with a doctor who killed her husband, John travels across the Earth’s blasted alien ruins to seek the life of the man who killed his friends.
It’s the one thing he has left.

Audiobook: Into The Outside by Lynda Eng