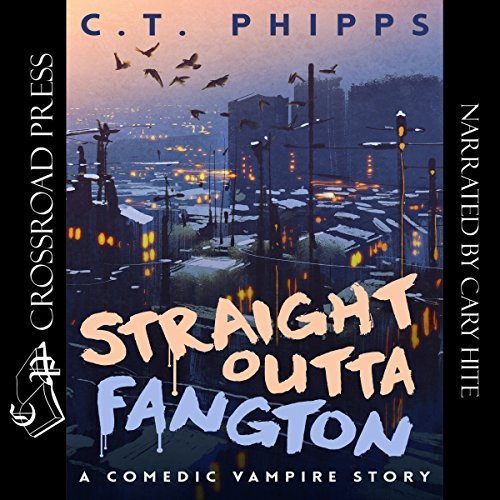 Hilarious and a Blast of a Book

Being a Vampire must suck… if you get my pun.  Though this book would have you believe that vampires do not suck as much as they slurp since the heart helps push the blood out of the body.  But, being a poor black vampire must be even worse.  Enter the life of Peter Stone who has been exiled from New Detroit (a vampire mecca).  He works a terrible job making terrible money.  That is all until one night he finds a girl in the bathroom of the convenience store he works at in the middle of a transition into a vampire.  Instead of leaving her alone like he should have, he helps her out, throwing him into the crazy underworld of New Detroit.

I’ll state up front that I would never actively seek out a vampire book. They are either too glitzy and glamorous or too bloody and vile.  Straight Outta Fangton got me because it was billed as “comedic vampire story” and I knew I had to take a shot on it.  Boy, am I glad I did.

Straight Outta Fangton was a really funny story.  Phipps knows how to write a good story and add lots of comedy in it.  The comedic parts did not take away from the story at all but actually added to it.  I found myself laughing throughout but still riveted by the story.

Stone was such a great character and such a change of pace for me.  Funny, a little nerdy, and seemingly annoyed all the time – he was one of those rare “real” feeling characters.  Especially for a vampire book. I love reading about someone that I can relate to or feel like I know.  Stone was one of those characters.

Overall, Straight Outta Fangton was a really enjoyable book on a lot of fronts.  Fantasy/Vampire lovers will love the story and the backstory of Stone (and the others around him).  Comedy fans will be laughing throughout at all of the references throughout.  And fiction lovers will love the story that Phipps has created and the world around it.  I felt like I was there and that I actually knew Stone and his friends.  Straight Outta Fangton will be a book that won’t disappoint.

Also, Cary Hite does a great job narrating this.  Giving Stone a voice really brought this book to life.  His narration definitely added to an already great story.

Peter Stone is a poor black vampire who is wondering where his nightclub, mansion, and sports car is. Instead, he is working a minimum wage job during the night shift as being a vampire isn’t all that impressive in a world where they’ve come out to mortals.

Exiled from the rich and powerful undead in New Detroit, he is forced to go back when someone dumps a newly-transformed vampire in the bathroom of his gas station’s store. This gets him fangs-deep in a plot of vampire hunters, supernatural revolutionaries, and a millennium-old French knight determined to wipe out the supernatural.

Sometimes, it just doesn’t pay to get out of the coffin.

C.T Phipps is a lifelong student of horror, science fiction, and fantasy. An avid tabletop gamer, he discovered this passion led him to write and turned him into a lifelong geek. He is a regular blogger on “The United Federation of Charles” (http://unitedfederationofcharles.blogspot.com/).