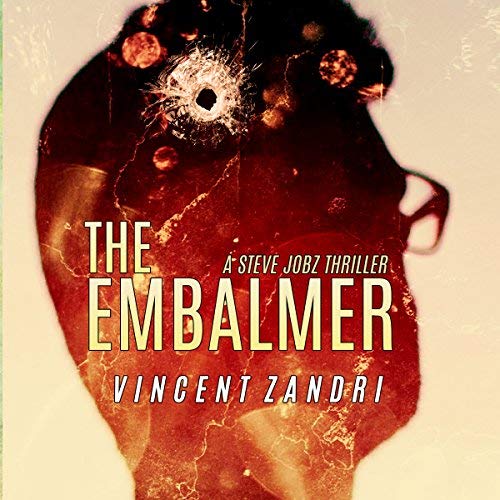 The Embalmer is a story about a killer on the loose. The only person who can help catch him has a job at the New York State Department of Unemployment Insurance Fraud. Okay, he also used to be a police officer — but he might be just the guy for the job.  And did I mention that his name is Steve Jobz?  Don’t bring it up to him though, it’s a touchy subject.

I love a good detective thriller and The Embalmer was just that.  There was a lot of action, a lot of great dialogue (especially between Steve and Miller), and a really (really) messed up serial killer.

Did I mention that the killer is messed up?  This book is sticking with me.  I keep seeing scenes that Zandri wrote out and that Wehrlen described in the audiobook that just won’t let go.  That’s a sign of a well-written book.

The Embalmer has a lot going for it, as mentioned above.  But as someone who lived through someone who had dementia and Alzheimers — I thought that Zandri’s description of that disease was spot on.  It hit a little too close to home for me through some parts.

Jobz himself might be one of my favorite recent characters I’ve read. Especially for detective/thriller novels.  He had just the right kind of humor that really made me laugh out loud (literally).  It reminded me slightly of old noir titles, especially the ones that didn’t take themselves too seriously.

Overall, I thought that The Embalmer was a great start to a series.  A great read that I think people will really enjoy.

Add in the narration by Andrew B Wehrlen and you’ve got gold.  Wehrlen gave the perfect narration for this book — allowing Zandri’s words to flow exactly the way I think he wanted them.  Wehrlen brought to life the Jobz character and I hope that he will continue to narrate more books in this series.

"The Embalmer is dying to meet you..."

You might think that a guy with the name of Steve Jobz would be one lucky man. That he'd be rich and have the world at his fingertips. But instead, Jobz is barely making ends meet at the New York State Department of Unemployment Insurance Fraud. A former cop who was forced to retire early after shooting a young man of color during a convenience store holdup, Jobz has since resigned himself to wasting away his days in a four-by-four cubicle inside an office space that's more boring than watching the paint dry.

But when his overbearing boss calls him in on a job that the Albany Police Department is heading up, Jobz has a chance to get out of the office for a while. But what he doesn't realize is that he's about to come face to face with a serial killer who embalms his victims alive. What he is also about to face down, is his own worst nightmare come true when that serial killer turns out not to be a stranger.

The Rationing by Charles Wheelan (Narrat

One thought on “Audiobook: The Embalmer by Vincent Zandri (Narrated by Andrew B. Wehrlen)”