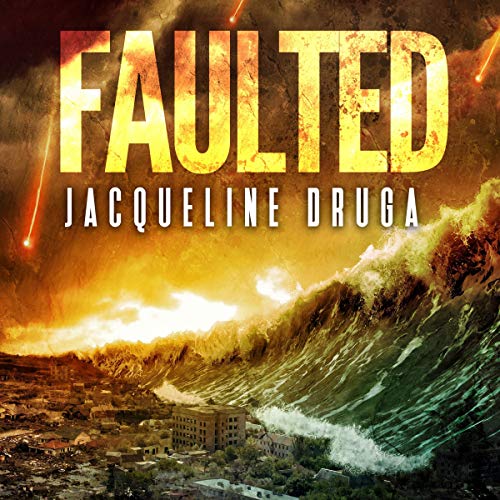 Faulted was a book I had high hopes for. I’ve really enjoyed Druga’s work and I knew that she was going to do a good job with an apocalyptic scenario like the one mentioned in Faulted which was described as “A meteor storm barreling towards earth ignites a chain reaction of devastating events that will bring the world to its knees.”

So, digging into the story – I was left hanging a bit. My biggest complaint was that in the audiobook (to no fault of ABW) it was nearly impossible to figure out who was the main characters in a scene. Druga seemed to just jump from one person to another. I think in a print or ebook this isn’t an issue. There are differentiators that let the reader know that they are in a new chapter or a new person, but in audio – this can be forgotten or left on the side, which makes for a really confusing book. A lot of times when it would switch from one character to another I would spend the first few moments trying to figure out who we were on instead of enjoying the next scene.

Putting that aside, the actual apocalyptic events in Faulted were pretty awesome. Definitely, some of the best written I’ve seen in a while. Druga was able to show the peril and the helplessness that these characters would have felt. The waters rising from tsunami’s were pretty scary and the idea that they were going as high as they were was explained in a way that made sense and added to the helplessness that the reader felt.

There could have been more science or “backing” story telling us how we missed it and what damage it would be doing in upcoming chapters. Druga featured a back story a little into Faulted that left a lot desired in my opinion. It was quickly said “oh yeah, we missed it, and it’s going to kill a lot of people” and it just kind of moved on.

Overall, Faulted was one of those stories that I really wanted to be good and it was average to above average at best. Things were hard but they weren’t impossible and a lot of times there was a time jump from “things are hard” to “everything is better now”. It did remind me a lot of a combination of The Day After Tomorrow and Deep Impact.

A meteor storm barreling towards earth ignites a chain reaction of devastating events that will bring the world to its knees.

For the first time since his divorce, CJ will be able to take his son on a vacation. Along with his father, they make it a guys’ trip to the west coast. Little do they know their trip that is intended to be a lifetime of memories would include facing insurmountable odds.

The lack of warning leaves everyone in the dark about what has occurred and vulnerable to all that unfolds. It doesn’t stop with the meteors. The disastrous events come one after another, a domino effect of annihilation.

Like billions of others across the world, CJ and his family are thrust into a life full of catastrophic events.

Far from home, caught up in a whirlwind of a distraction, CJ soon discovers it’s not a matter of going anywhere…it’s a matter of staying alive until the events run their course - if that’s even possible.

Also by this author: What Tomorrow Brings, Last Days, 10:37, No Man's Land