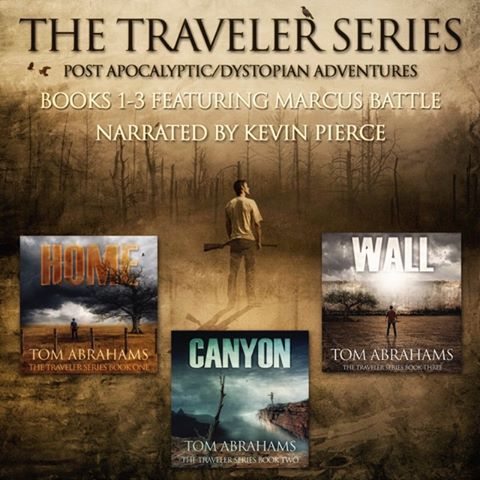 The First Three Books All At Once

Marcus Battle was a prepper, he wasn’t sure what was going to happen, but he knew something was going to happen sometime soon.  He was prepared for almost anything, but when the pneumonic plague started to break out in the US, he could only be so prepared.  After nearly losing everything, the only thing that Battle had left was his home.  The home that he prepped with his wife and son.  The home that he needed to protect against anyone or anything.

The narration was done by Kevin Pierce, and I knew I’d listened to another book he narrated — once I looked it up I laughed.  It was another prepper tale.  He really has the perfect voice of a prepper, especially one that has a military background.  Pierce just allows for the perfect flawed main character to shine strong (that and really good writing on Abrahams’ part).

The funniest thing about this book to me is that it wasn’t touted as being a bio-thriller.  The name “plague” wasn’t in it, there were no biohazard symbols on the cover, and yet the scourge that was taking over and killing people was better documented than in most of the books I’ve read lately.  Seriously, I wouldn’t in any way describe this as a bio-thriller, but it has elements of it.

Battle was an interesting main character and protagonist.  There were things that he would say or do that could or would turn off most people from liking him if you didn’t understand his story.  But the way Abrahams would flip back and forth from backstory to present day made the story really fall together.  Honestly, when an author flips so much it’s usually hard to follow but this really helped make a “simple” story come to life.  Yes, it’s about a man surviving on his land by his terms, but it was so much more.

Overall, this was a really enjoyable story.  I found myself wanting to sit in my car longer to hear just a little more or staying up a little too late.  Abrahams has a way of keeping the readers hanging on every word.  This finished, and I really wanted more.  But at the same time, it was perfect, the story arc was complete with room to add more in the next book.

Another thing that I noticed was that a lot of prepper books feel like they have an agenda.  Either trying to see things the way they do or promoting a certain political party.  This book was different.  It was written as a post-apocalyptic and dystopian novel first, with a little bit of prepper mentality sprinkled in.

Now, I have to wait until the next book is on audiobook and hope that Kevin Pierce narrates it.

Marcus Battle is back at it again.  Picking up where Home left off, Battle is thrown into worse and worse situations as he is forced to face the ever-changing post-Scourge world.

The narration was done by Kevin Pierce, who also narrated the first book.  I’ve mentioned every time that I listen to a book narrated by Pierce that he has the perfect “prepper” type voice, and I felt that way again.  But, his voice is synonymous with Battle in my eyes.  They are the same person.

I really enjoyed Home, the first book in this series.  Once I realized that there was more to the story, I couldn’t wait to dive into Canyon.  I was not disappointed.  Canyon starts off right where Home left off and doesn’t take its foot off the gas the entire story.

Battle is thrown into unbelievable circumstances over and over again and it seems like he can almost get through anything.  And as the reader, you are taken along for the ride, thrown into scarier and scarier situations along with Battle and his small group of new friends.

I really enjoyed Home, but Canyon’s jumping back and forth between present and the past to give a much better background on Battle makes this book even better.

I’m not one for spoilers, and I won’t spoil anything by hinting, but the ending of this book was crazy.  I had some sneaking suspicions throughout, but I was glad to have them confirmed at the end.

I will be eagerly awaiting the third book in this series to figure out what happens to Battle, and how he will defend his home, his friends, and his newly acquired accomplices.

A battle is coming, well make that two battles.  One actual battle between the two sides and Marcus Battle, the incredibly resilient good guy in the Traveler Series.

The narration for Wall was done by Kevin Pierce who has done the entire Traveler series and done an awesome job on them.  As I’ve stated time and time again, Pierce just has one of those voices that really makes these post-apocalyptic stories.  It’s no wonder he’s been featured over and over again on my blog considering that’s one my favorite genres.

The story picks up where the other two have left off so I may give some spoilers away.  Battle is still alive and kicking and is now called upon to help more people once again.  I really like the inner angst that Abrahams plays off of.  Battle is a mess internally.  He’s fighting a lot of demons that would cause a lesser man to crumble.  I think that it’s written beautifully — allowing Battle to have his moments, but also recover from them and grow because of them.

The combination of Abrahams writing style and Pierce’s narration really made this book blow by. It felt like one moment I was just starting chapter 1 and the next the book was almost over.  Not every book can do that, but this one definitely made the time evaporate.

Overall, the story was a little different from the first two Traveler books but was different in a needed way.  This book had a lot of conclusions and endings to things.  Without giving anything away, I will say that I was happy and a bit surprised by the ending.

THE FIRST THREE BOOKS IN THE AMAZON BEST-SELLING SERIES
***AS SEEN IN SCI-FI MAGAZINE***
"Mad Max Meets The Good, The Bad, & The Ugly"

One of “Twelve Books You Should Read If You Love The Walking Dead.” —Bookbub
"Tom Abrahams' HOME introduces us to a prepper nightmare." --BoingBoing

HE THOUGHT HE WAS PREPARED. HE THOUGHT HIS FAMILY WAS SAFE. HE WAS WRONG.

Five years after a pneumonic plague killed two-thirds of the world’s population, army veteran Marcus Battle is isolated. He’s alone with his guns, his food, and the graves of his wife and child.

Unaware of the chaos that’s befallen everything outside of his central Texas ranch land, Marcus lives a Spartan life. If anyone steps onto his property he shoots first and never ask questions.

But when a woman in distress, chased by marauders, seeks asylum, Marcus has a decision to make.

Does he throw her to the wolves to protect himself or does he help her and leave the shelter and protection of home?

HE’S HOMELESS. HE’S ON THE RUN. AND HE WANTS REVENGE.

Marcus Battle has left behind his home.

Now he’s on a seemingly impossible mission to find a missing child. But can he balance that responsibility with his deep, primal desire to exact revenge on the men who destroyed his solitary existence?

The world he discovers on his journey isn’t the one he remembers before a pneumonic plague called The Scourge killed two-thirds of the world’s population. It is lawless, depraved, and far-deadlier than the disease which created it.

Battle made a promise to find that child. It’s a promise he regrets more acutely with every step of the journey where he is as much the hunter as he is the hunted.

HE SURVIVED THE SCOURGE. HE ESCAPED THE CARTEL. NOW HE FACES THE WALL.

In the chaos of a global plague, evil took hold. Governments fell, the good became servants, and the Cartel rose to power.

A wall was built to contain the wasteland and keep the evil at bay. Now an organized resistance wants change. They're willing to fight for it and they've asked Marcus Battle to help.

The last thing Battle wants is another war. But if that's what it takes to gain freedom and safe passage to the other side of the wall, he'll take aim and fire.