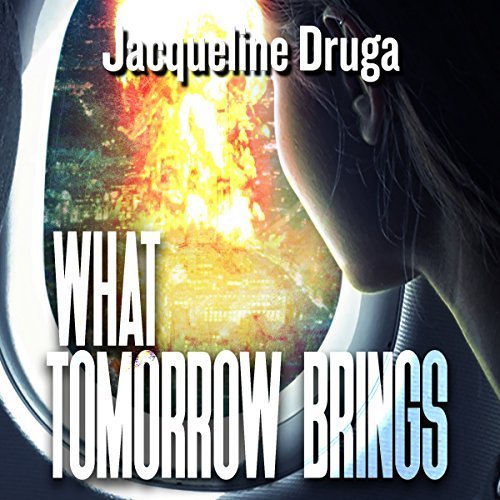 What would happen if you were on a plane when bombs dropped on the US? What about if there were military and other important people on your plane, how would that make you feel? What if you found out that this plane was booked for ulterior motives?  All of these questions and a lot more are answered in What Tomorrow Brings by Jacqueline Druga.

Druga does a great job putting a new twist on the end of the world as we know it (EOTWAWKI) genre with a partially-political fueled book that shows what would happen if there were people pulling strings (and you didn’t know it).  It’s hard to explain without sounding like an idiot because I don’t want to spoil the story for you.

What Tomorrow Brings tells a story about a few different end of the world situations from different points of view but almost all of them from the same family.  It was an interesting take on a crowded genre.  Also actually dropping bombs (and having scenes where people actually saw them drop) is something new for me too.  Most Post-Apocalyptic books take place after the bombs dropped (hence “post”), but this one happened pre and during. Now, I’ve definitely read other books like this, but it felt slightly different.

The narration done by Wehrlen was perfect for this.  He was able to add the right amount of drama without being overly dramatic.  He made an already easy to read book easier to finish.

Overall, the story was interesting and it felt like a slightly new take on an apocalyptic story.  I’m interested to see if there are other books in the works with the same cast of characters.

In the midst of a bitter family feud, the much divided Rolland family is thrown together when news of their father’s untimely passing places them on a red-eye flight from Seattle to Washington D.C. Although, they are physically close in the tight space of the aircraft, Rege, Mark and Kit are at their farthest distance apart emotionally.

Until the unthinkable happens.

Two hours into the flight, missiles streak across the star-filled sky, the detonation of a nuclear warhead causes the plane to make a forced landing.

A family torn apart are now together living the inconceivable. Circumstances outside of their shelter are dire and the future far from certain.

America is devastated and crippled by the nuclear attacks. Rege, Mark and Kit must chart out their path deciding what to do and where to go. What is right? What is wrong? Not only for the Rolland Family, but for everyone, survival is the top priority. Each day is a fight against the odds for water and food, while holding on to every ounce of hope they can live long enough to see tomorrow.