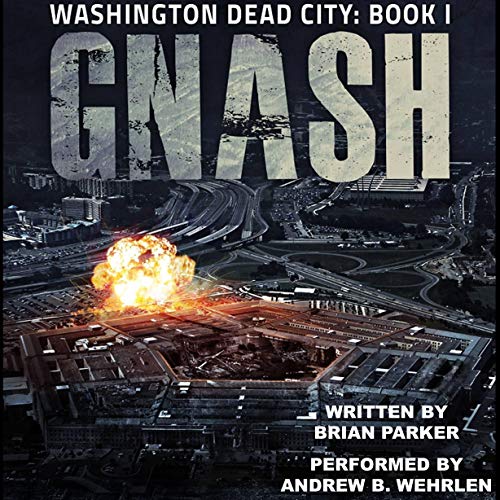 Gnash is a solid start to what I hope becomes a good Zombie series. The plots’ pacing was steady and had some unique elements to it, which is hard to do in this genre, and it was an enjoyable read overall but there was just something missing from it that stopped me from really enjoying this.

A terrorist organization has been waiting for the day it could take down their enemies, and unfortunately for everyone, it has come about. In coordinated attacks, this organization manages to kill multiple world leaders and unleash a virus that will change everything. With the world in turmoil after the assassinations, it only gets worse when the virus that was unleashed in the Pentagon reanimates the people it killed. The US Government has sealed off the Pentagon in the hopes they can prevent the virus from spreading, but life (or in this case Undead life) will find a way, and before people know what’s happening, the dead are rising and the virus is spreading rapidly.

One thing I really liked about the plot was that there are two types of zombies. The first ones, type A, are the ones who were reanimated in the Pentagon, these ones are faster, smarter and more lethal than the ones they infected. The ones infected by the first ones, type B, are the typical shambling Zombies and are plentiful. It added a little something unique to the story, though I don’t think we got to see enough of the type A Zombies!! But it doesn’t just focus on the Zombies, America is also dealing with a nuclear strike from France and different groups trying to benefit from the misery that is happening.

What stopped me from enjoying this more was the fact that I didn’t connect with the characters. I felt like there wasn’t time to connect with them because it seemed to jump from one to the next rather quickly. I also felt like both the characters moved on way too fast. I know they think each other dead, but to move on so quickly felt wrong. Another thing I found was that the plot wasn’t expanded upon, and by that I mean, I would have liked more on the terrorist organization… something happens that felt rushed and was a big let down for me, and the Zombie type A. The author intrigues with the type A ones, but there is very little about them or encounters with them in this one. I can only hope we get more in future books!

In all, I enjoyed this and I will continue on with the series to see what happens.

Andrew B. Wehrlen was clear, easy to follow and read this well. He has great tones for the females which doesn’t sound forced and he was able to bring the story alive. I thoroughly enjoyed his performance.

An ancient fundamentalist organization executes several attacks simultaneously across the globe. A deadly viral compound is unleashed in the Pentagon, and the airborne virus turns the building's population into zombies. A Secret Service agent, coerced by the terrorists to assassinate several heads of state, sends the world into chaos.

Meanwhile, a former army officer stranded in the Midwest is forced to fight for his life while his fiancé is trapped in the Washington, DC quarantine zone and a desperate US Army Delta team searches for a way to end the madness.

They must each fight for their own survival as the nation battles to end the zombie threat before it becomes a global pandemic.