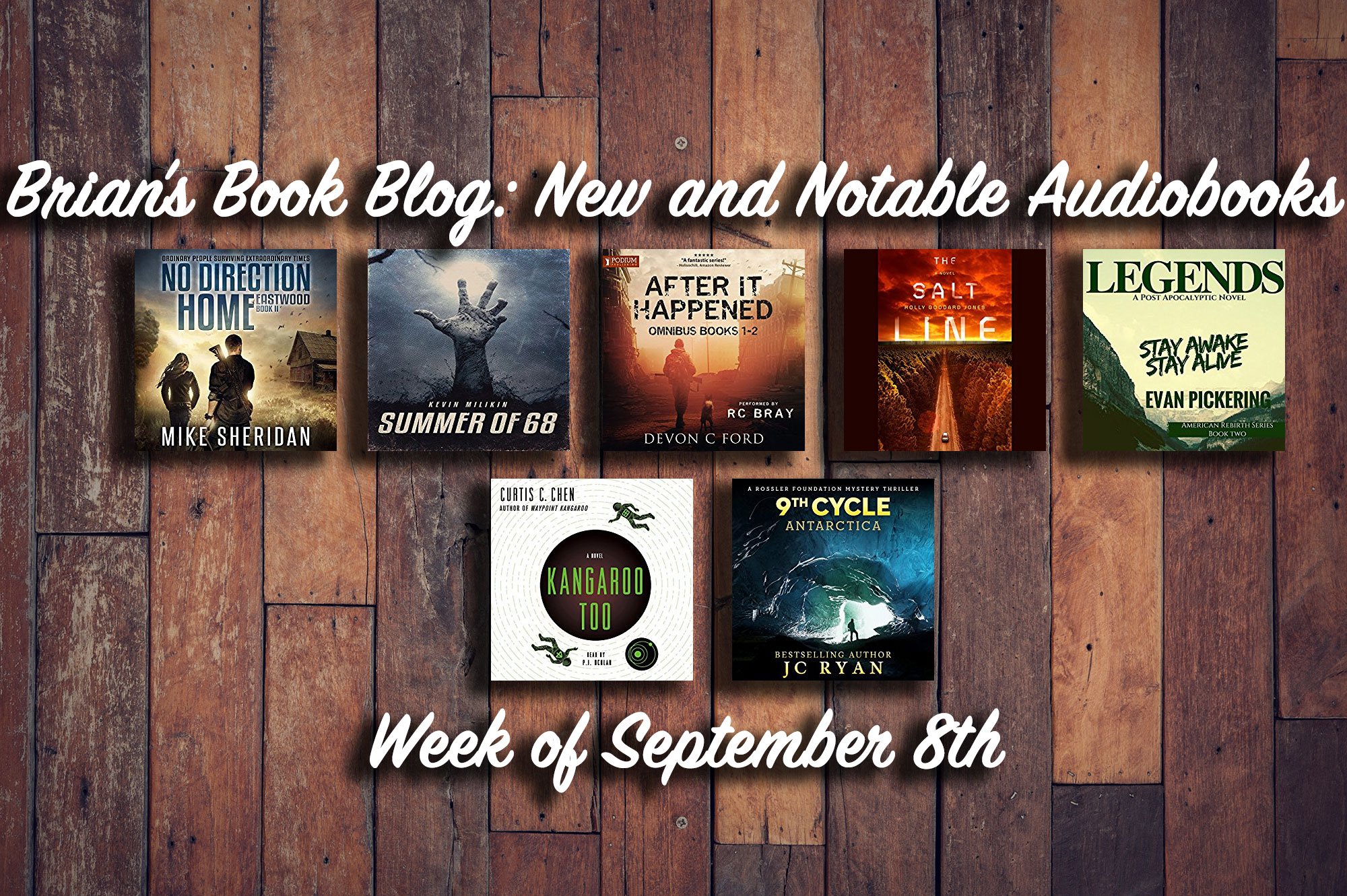 Looking for a new audiobook to read? Look no further than my weekly New and Notable Posts on Brian’s Book Blog.

In Eastwood, the second book of the No Direction Home series, all hell breaks loose when a violent bandit arrives in the Cohutta.

With strong, original characters that jump off the page, this is a fast-paced story that fans of post-apocalyptic survival fiction will appreciate.

Summer of 68 by Kevin Milikin
Narrated by Rick Gregory

When the world ended some people believed that it was the fault of a failed space probe, others—an act of vengeance from an angry God. No one knew the reasons why but across the globe, millions of the recently deceased rose from the dead, possessed with one singular goal: To eat the flesh of the living.
Over the course of a few short hours the world was lost.

In the Northern California town of Red Bluff, a Sheriff struggles to grasp this strange and hellish turn of events that have ravaged his small town and maintain order as it all falls apart.

Two brothers struggle to make sense of this new world, traveling through the putrid remains of their beloved town—torn between survival and the love for their mother. The world has ended and soon they will learn that all they need to survive is each other. 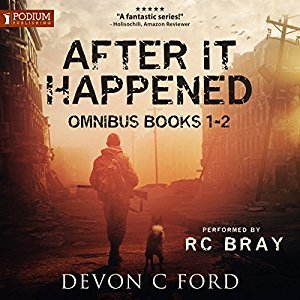 A bundle of parts 1 and 2 of the After it Happened Series.

Set in the UK in the immediate aftermath of a mysterious illness which swept the country and left millions dead, the series follows the trials facing a reluctant hero, Dan, and the group he forms around him. They must battle the elements, find sufficient supplies and equipment to survive, and protect themselves against the most destructive force on the planet: other people.

In the spirit of Station Eleven and California, award-winning novelist Holly Goddard Jones offers a literary spin on the dystopian genre with this gripping story of survival and humanity about a group of adrenaline junkies who jump “the Salt Line.”

How far will they go for their freedom—once they decide what freedom really means?

In an unspecified future, the United States’ borders have receded behind a salt line—a ring of scorched earth that protects its citizens from deadly disease-carrying ticks. Those within the zone live safe, if limited, lives in a society controlled by a common fear. Few have any reason to venture out of zone, except for the adrenaline junkies who pay a fortune to tour what’s left of nature. Those among the latest expedition include a popstar and his girlfriend, Edie; the tech giant Wes; and Marta; a seemingly simple housewife.

Once out of zone, the group find themselves at the mercy of deadly ticks—and at the center of a murderous plot. They become captives in Ruby City, a community made up of outer-zone survivors determined to protect their hardscrabble existence. As alliances and friendships shift amongst the hostages, Edie, Wes, and Marta must decide how far they are willing to go to get to the right side of the salt line.

Legends Never Die.
Sequel to the Post-Apocalyptic Bestseller HOOD!
From the remnants of America, a new world is taking shape. But not all is as it seems.

As Rangers of the Sons of Liberty, Whiskey and Taylor have a new life ranging out into the overgrown vestiges of civilization, teaching young soldiers how to survive.

But peace never lasts long. The tides of war beckon as rebels are found within the borders.

A secret organization lies unknown to the warring factions in the new Americas.

A mysterious message has been nailed to Whiskey and Taylor’s door.

Someone from their past is still alive.

Twenty years have passed since the fall of the Kaiser and the end of the First War.

Survivors across the country have slowly banded into factions, rebuilding semblances of civilization from the vestiges of the old world. The end of the Kaiser’s war brought years of relative peace to the country… But as the factions rise up against the Sons of Liberty, conflict rises on the horizon.

As war comes again to the vestiges of America, the factions have united behind a deadly sniper called ‘the Ghost’. The Sons of Liberty stand alone, and The new civilization stands upon the brink of falling apart once more . . . But the further from home Whiskey and Taylor get, the more muddled the truth seems to be.

But one thing is clear. Someone from their past is still alive.

Sequel to the bestselling Book 1 of the American Rebirth Series, HOOD! 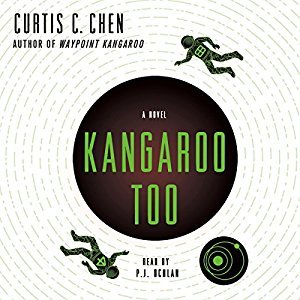 Kangaroo Too by Curtis C. Chen
Narrated by P.J. Ochlan

Set in the same world as Waypoint Kangaroo, Curtis C. Chen’s Kangaroo Too is bursting with adrenaline and intrigue in this unique outer space adventure.

On the way home from his latest mission, secret agent Kangaroo’s spacecraft is wrecked by a rogue mining robot. The agency tracks the bot back to the Moon, where a retired asteroid miner—code named “Clementine” —might have information about who’s behind the sabotage.

Clementine will only deal with Jessica Chu, Kangaroo’s personal physician and a former military doctor once deployed in the asteroid belt. Kangaroo accompanies Jessica as a courier, smuggling Clementine’s payment of solid gold in the pocket universe that only he can use.

What should be a simple infiltration is hindered by the nearly one million tourists celebrating the anniversary of the first Moon landing. And before Kangaroo and Jessica can make contact, Lunar authorities arrest Jessica for the murder of a local worker.

Jessica won’t explain why she met the victim in secret or erased security footage that could exonerate her. To make things worse, a sudden terror attack puts the whole Moon under lockdown. Now Kangaroo alone has to get Clementine to talk, clear Jessica’s name, and stop a crooked scheme which threatens to ruin approximately one million vacations.

But old secrets are buried on the Moon, and digging up the past will make Kangaroo’s future very complicated… 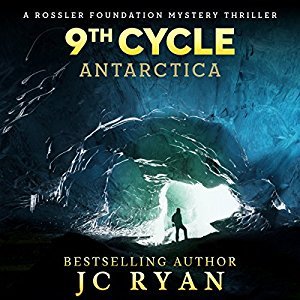 Was there a human civilization in Antarctica in the past?

Will we ever know?

In November 2002 a special U.S. Navy SEAL team is sent to Antarctica to locate and rescue a film crew that has become lost. No trace of them is found, except for film footage of strange artifacts buried under the ice. Everyone who saw the film is warned to never talk about what they have seen – EVER AGAIN.

More than a decade later, in Boulder, Colorado, Professor Charles Summers is intrigued by the discovery of a 16th century map showing the coastline of Antarctica so accurately that when NASA investigates the maps they find that they must update their own current maps! But this map predates any record of the discovery of Antarctica by 300 years!

Who Drew Those Maps and When?
Did They See Antarctica Without Its Icecap?
Did Humans Live On Antarctica Before?
But…Antarctica Has Been Under Its Icecap For 200 Million Years!

Is it possible that beneath the ice we will find the remains of an impossibly ancient civilization? The Rossler Foundation arranges an expedition to Antarctica to search for evidence of such a civilization. The Orion Society immediately mobilizes their resources to infiltrate the expedition. Will their treachery and hunger for power stop this expedition from reaching its goals?

Is There An Ancient City Under The Ice Of Antarctica?

~~~
NINTH CYCLE ANTARCTICA, the second book in the Rossler Foundation Series, is a full-length novel, a stimulating thriller about an attempt at uncovering true human history in the face of adversity. This adventure takes readers back into the Mysteries of the Rossler Foundation which began with JC Ryan’s THE TENTH CYCLE.