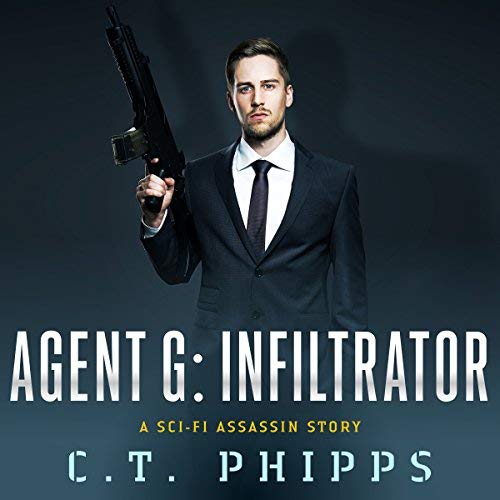 Agent G: Infiltrator is a fast-paced technothriller about a futuristic assassin appropriately named “G”.  G’s job is to kill people for money.  He has to do it for 10 years and they will give him his memory back.  I can tell you one thing, this is way more than a story about a sci-fi assassin.

My honest “blurb” explanation of this book is Jason Bourne meets Hitman with a little bit of an overarching feeling of Memento.  And to be honest, I’m proud of that explanation.  There are parts of this book that felt like they were pulling from the Bourne books and movies while other parts felt like they were expanded on from the Hitman video games (I never saw the movie).

C.T. Phipps can write.  Wow, can he write.  He was able to make me laugh one second and be completely engulfed in another theory the next.  G was easily one of the most memorable characters I’ve read in a long time.  He had an attitude that I can relate to and every time he was snarky or said something smart I had a good chuckle.  A lot of books like this can be so serious throughout making them feel longer than they are, but the comedic breaks throughout this really made the pages and hours fly by.

Tie that with the incredible narration by narrating phenom Jeffrey Kafer and you have a hit.  Kafer was perfect for this book.  I listen to a lot of books and this was easily one of the best fits I’ve heard in quite some time.

Every time I thought I had this book figured out I was wrong and it threw me for another loop.  There were a few times that I thought I’d figured the ending out — nope! Not even close, nice try Brian.

Overall, Agent G: Infiltrator was an incredibly enjoyable technothriller sci-fi assassin book that was fun.  You can’t say a lot of books are fun… but I enjoyed the heck out of it.  If you enjoy conspiracy theories, the singularity, cyborgs, and good old clean assassin fun — Agent G: Infiltrator is definitely for you.

“Black Technology has made murder a billion dollar industry.”

The International Refugee Society has twenty-six cybernetically enhanced “Letters,” and for the right price, they’ll eliminate anyone. They’ve given up their families and their memories for ten years of service with the promise of a life of luxury awaiting them.

Agent G is one of these “Letters,” but clues to his past are starting to emerge while he’s on a dangerous mission to infiltrate the Society’s most dangerous competitor. In the midst of all the violence, subterfuge, and deceit, he’ll need to keep his wits about him and trust sparingly.

After all if an organization will kill for money, what would they do to keep the truth hidden?