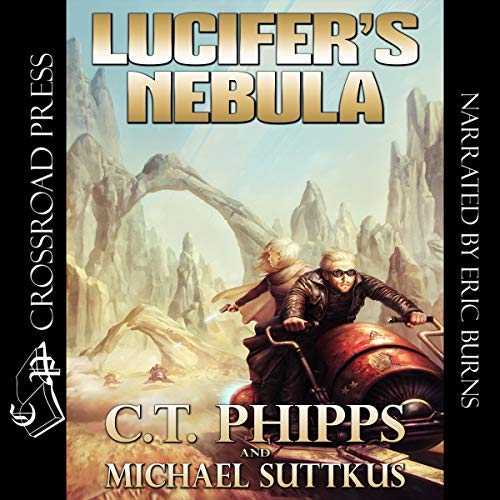 Definitely Check This One Out

This is my eighth book by CT Phipps and there hasn’t been a single one that I haven’t liked yet.  Even some of the ones that aren’t in my “normal” genres.  Lucifer’s Nebula is the second book in the Lucifer’s Star series by Phipps and Michael Suttkus and it was a blast to listen to.  Which, ironically is exactly what I said about the first book.

I went back and read my review of the first book and now I have to try really hard not to write the exact same thing.  I felt the same way about this book but it wasn’t as much of a whodunit and more of a pure science fiction book.  It has alien races, alien god-like races, cognition AI’s, deceit, double-crossing, cloning (legal and illegal), family issues, and so much more.  I’ve noticed that in these books I think I’m going to get one or two stories and arcs but Phipps and Suttkus always throw 10-15 at me.

I think my favorite parts of this book were just the attitude that Cassius had throughout it.  He grew, a lot, as a character and he both hated and loved himself for it.  His journies – both internal and actual physical ones were both extremely interesting to follow.  I felt like I was getting a deep psychological look into his brain as he was going through these things – without it feeling like too much.

Near the end of this book, I found myself needing to focus a lot since they were jumping all over the place.  I believe this was done on purpose and it caused some disconnect for me (not in a bad way) but just a “what in the heck is going on” way.  I think we were supposed to feel the same confusion and disorientation that Cassius felt.

Combine the excellent writing with the narration by Eric Burns who just brings their words to life – you have a winner in Lucifer’s Nebula.  A blast of a book from beginning to end.  You should definitely check this one out.

From the best-selling author of The Rules of Supervillainy: Captain Cassius Mass can only run so far from his problems and the galaxy isn't big enough to hide from those pursuing him. Cassius soon finds himself blackmailed into a mission that will clear him of all charges as well as protect him from future persecution: bring an end to the civil war currently racking the galaxy. Accompanied by a new set of untrustworthy allies, the crew of the Melampus, and the A.I duplicate of his dead wife - Cassius needs to figure out how to not only deal with his target but also his employers.

Because the entire universe is at stake.

Also by this author: Cthulhu Armageddon, Agent G: Infiltrator, The Tower of Zhaal, Lucifer's Star, I Was a Teenage Weredeer, An American Weredeer in Michigan, Brightblade
Also in this series: Lucifer's Star