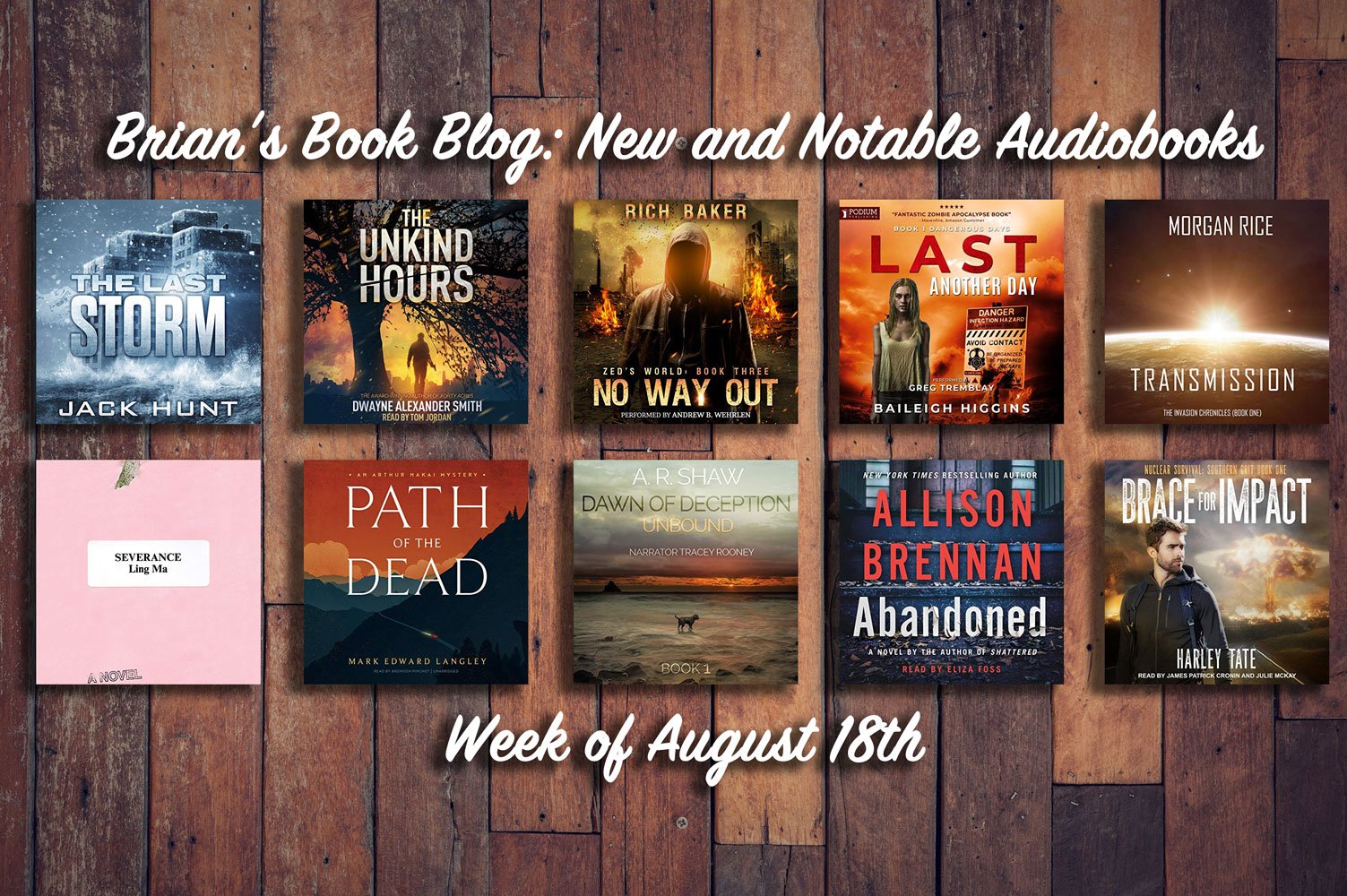 Welcome to Brian’s Book Blog’s weekly New and Notable Post for the Week of August 18th.  We share the 10 books from this week that caught our eye featuring Post-Apocalyptic, Horror, Sci-Fi, Thrillers, and more. Enjoy! 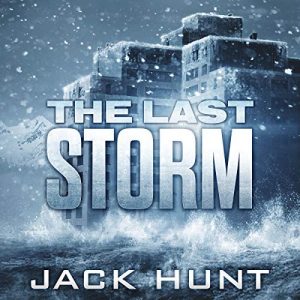 The Last Storm by Jack Hunt
Narrated by Kevin Pierce
Jack Hunt
How far would you go to survive?

Following the death of his son, Alex Riley moves to a small town with his family to take a position from a recently deceased police officer. However, their peaceful existence is shattered when a sudden catastrophic storm sweeps the nation and they find themselves trapped in the town’s 14-story building with local gang boss Cayden Jones.

When Alex learns the truth behind the death and the reason Cayden is there, Alex, an aging chief, and a small band of survivors must ride out the storm and fight back to stay alive.

This intense, pulse-pounding postapocalyptic survival thriller will keep you listening long into the night. It’s a powerful story of one family’s struggle to survive against incredible odds. 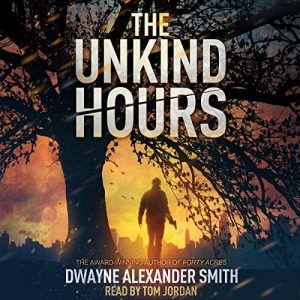 The Unkind Hours by Dwayne Alexander Smith
Narrated by Tom Jordan
Damn Good Idea Productions
Steven Burns, a former major league baseball player, has the perfect life…until his five-year-old daughter is abducted and murdered. With zero suspects, the police are left baffled, and Steven must accept the haunting loss without justice. Until a shadowy stranger offers Steven an opportunity to exact ultimate revenge. Compelled by fury and grief, Steven finds the stranger’s unspeakable proposition impossible to resist, despite fears he’s headed down a path of no return. 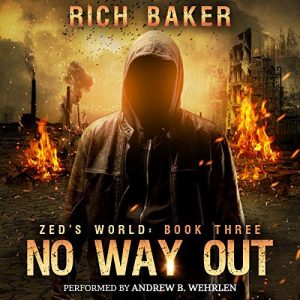 Zed’s World Book Three: No Way Out by Rich Baker
Narrated by Andrew B. Wehrlen
Baying Hound Media
For Kyle Puckett, Earth has become a savage place. As the world continues to decay, the survivors of the viral plague have started choosing sides. With each encounter the stakes – and the body count – continue to rise. With the skies growing darker and the dead pressing in, both sides may soon find out that there is No Way Out. 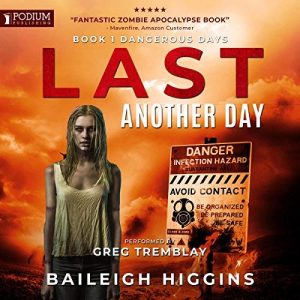 Trapped in the shower by her undead husband, Morgan prays for rescue but quickly realizes she’s on her own. She escapes, only to find that the horror has spread and now threatens everything she holds dear. With each passing moment, death becomes more certain.

Logan returns to his childhood home and teams up with Max, an army deserter racing against the clock to save his family. When the infection outruns them, they face the real possibility that everyone they know is already dead. Or worse, undead.

All it takes is one mistake. As the sun sets against the backdrop of the African veldt and living nightmares walk the streets in the shape of their loved one’s bodies, humanity’s last hope rests in the hands of ordinary men and women called to do extraordinary things.

For fans of The Walking Dead, Dawn of the Dead, and all things zombie comes your next obsession, a thrilling series that you won’t want to end. This is book 1 in the Dangerous Days series and packs a serious apocalyptic punch! 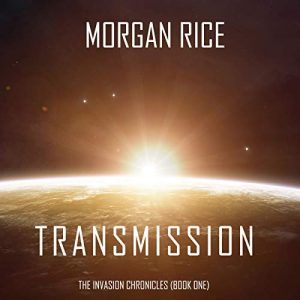 From number-one worldwide best-selling fantasy author Morgan Rice comes a long-anticipated science-fiction series debut. When SETI finally receives a signal from an alien civilization, what will happen next?

A 13-year-old boy, dying of a rare brain disease, is the only one able to hear and decode signals from outer space. SETI confirms it is a real signal.

What is the message? How will the world react?

And most of all: are the aliens coming? 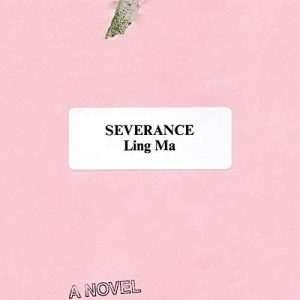 Severance by Ling Ma
Narrated by Nancy Wu
Macmillan Audio
Maybe it’s the end of the world, but not for Candace Chen, a millennial, first-generation American and office drone meandering her way into adulthood in Ling Ma’s offbeat, wryly funny, apocalyptic satire, Severance.

Candace Chen, a millennial drone self-sequestered in a Manhattan office tower, is devoted to routine. With the recent passing of her Chinese immigrant parents, she’s had her fill of uncertainty. She’s content just to carry on: She goes to work, troubleshoots the teen-targeted Gemstone Bible, watches movies in a Greenpoint basement with her boyfriend.

So Candace barely notices when a plague of biblical proportions sweeps New York. Then Shen Fever spreads. Families flee. Companies cease operations. The subways screech to a halt. Her bosses enlist her as part of a dwindling skeleton crew with a big end-date payoff. Soon entirely alone, still unfevered, she photographs the eerie, abandoned city as the anonymous blogger NY Ghost.

Candace won’t be able to make it on her own forever, though. Enter a group of survivors, led by the power-hungry IT tech Bob. They’re traveling to a place called the Facility, where, Bob promises, they will have everything they need to start society anew. But Candace is carrying a secret she knows Bob will exploit. Should she escape from her rescuers?

A send-up and takedown of the rituals, routines, and missed opportunities of contemporary life, Ling Ma’s Severance is a moving family story, a quirky coming-of-adulthood tale, and a hilarious, deadpan satire. Most important, it’s a heartfelt tribute to the connections that drive us to do more than survive.

Path of the Dead by Mark Edward Langley
Narrated by Bronson Pinchot
Blackstone Audio, Inc.
The battle is one of wits and cunning, where the strong heart will overcome his enemy.

Ex-marine Arthur Nakai spent years as a member of the Shadow Wolves, an ICE tactical unit tasked by the US government to hunt human traffickers and drug smugglers on the US/Mexico border. He put that life of confronting violence in the darker contours of the desert landscape behind him and settled into a quiet existence in New Mexico with his wife, Sharon, a local TV reporter.

But when Sharon goes missing after crossing paths with a serial killer who has just added to his list of young victims, Arthur’s calm world is shattered. He must return to the darkness of the life he left behind in order to save what matters most to him and the future he and his wife plan to share together. He can only hope that she is still alive and that his skills will be enough to find her.

So begins the hunt to find a ruthless killer and save the love of his life.

Unbound by A. R. Shaw
Narrated by Tracey Rooney
Apocalyptic Ventures LLC
From the best-selling author of the Graham’s Resolution and Surrender the Sun series, A. R. Shaw brings you Dawn of Deception.

In a post-apocalyptic world, Sloane Delaney struggles to keep her daughters safe. With all her neighbors gone and her abusive second husband dead, Sloane and her daughters, Mae and Wren, maintain a dangerous charade to keep looters at bay from their neighborhood.

When young Nicole shows up on their doorstep, nearly dead from dehydration and starvation as a result of her father’s growing paranoia, she joins the determined group as they adjust to life without most of the luxuries they had previously taken for granted. Aided by a pack of abandoned dogs, the women are able to project an image of an occupied and active neighborhood until corrupt FEMA agents arrive on the scene, threatening their hard-won sense of security.

Fleeing their now-unsafe home, Sloane and her girls head for the woods and an abandoned old house Sloane is sure will be a safe haven for at least a few days. She doesn’t count on the handsome and helpful Dr. Kent having also taken refuge there.

With her girls’ lives on the line, can Sloane learn to trust again in this dangerous new world? 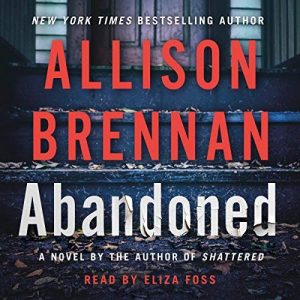 Abandoned: A Novel by Allison Brennan
Narrated by Eliza Foss
Macmillan Audio
New York Times best-selling author Allison Brennan weaves the intimate, unpausable story of an investigator confronting the most important – and most dangerous – mystery of her career, in Abandoned

Investigative reporter Max Revere has cracked many cases, but the one investigation she’s never attempted is the mystery from her own past. Her mother abandoned her when she was nine, sending her periodic postcards, but never returning to reclaim her daughter. Seven years after the postcards stop coming, Martha Revere is declared legally dead, with no sign of what may have happened to her. Until now.

With a single clue – that her mother’s car disappeared 16 years ago in a small town on the Chesapeake Bay – Max drops everything to finally seek the truth. As Max investigates, and her mother’s story unfolds, she realizes that Martha teamed up with a con man. They traveled the world living off Martha’s trust and money they conned from others.

Though no one claims to know anything about Martha or her disappearance, Max suspects more than one person is lying. When she learns the FBI has an active investigation into the con man, Max knows she’s on the right path. But as Max digs into the dark secrets of this idyllic community, the only thing she might find is the same violent end as her mother.

Brace for Impact by Harley Tate
Narrated by James Patrick Cronin, Julie McKay
Tantor Audio
This time, is an EMP only the first strike?

With a credible threat to the United States and a plane stuck on the tarmac, Grant Walton is 30 seconds from full-blown panic mode. He’s the only one in the airport who knows the truth. When the power goes out, he can’t waste another second. It’s the beginning of the end and every man for himself.

A nuclear attack will rip the country apart.

Leah Walton is wrapping up a 12-hour shift as a nurse in the heart of the city. When the power goes out, the hospital operates on crisis mode. She can’t stop to breathe, let alone check her messages. When she finally listens to her husband’s frantic calls, she’s faced with an impossible choice: leave or die trying.

Could you drop everything to save yourself?

Grant and Leah race the clock to find each other before the United States is plunged into chaos. When the bombs fall, their worst fears come true. Can Grant make it home in time to find his wife? Will Leah escape the brunt of the blast?

The EMP is only the beginning.

Brace for Impact is book one in Nuclear Survival: Southern Grit, a post-apocalyptic thriller series following ordinary people struggling to survive after a nuclear attack plunges the nation into chaos.