FALL IS OFFICIALLY HERE! Now that I got that off my chest here are some recommendations of books I’m most excited about coming out October 2018.

(Note this usually doesn’t include a lot of indie titles since they don’t announce their release until it’s live). 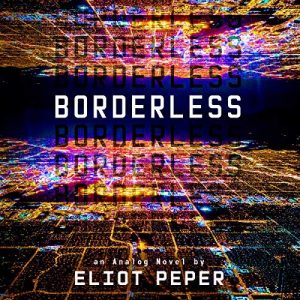 Borderless by Eliot Peper
Narrated by Sarah Zimmerman
Publisher Brilliance Audio
Information is power, and whoever controls the feed rules the world in this all-too-plausible follow-up to the science fiction thriller Bandwidth. 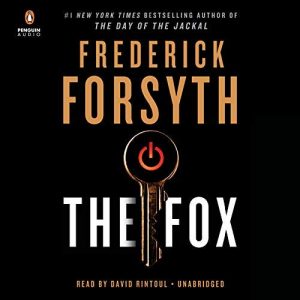 The Fox by Frederick Forsyth
Narrated by David Rintoul
Publisher Penguin Audio
The number one New York Times best-selling master of international intrigue takes readers into the bleeding-edge world of technological espionage in a propulsive thriller that feels chillingly real.

Former chief of the British Secret Intelligence Service Adrian Weston is awoken in the middle of the night by a phone call from the prime minister. Her news is shocking: the Pentagon, the NSA, and the CIA have been hacked simultaneously, their seemingly impenetrable firewalls breached by an unknown enemy known only as “The Fox”. Even more surprisingly, the culprit is revealed to be a young British teenager, Luke Jennings. He has no agenda, no secrets, just a blisteringly brilliant mind. Extradition to the US seems likely – until Weston has another idea: If Luke can do this to us, what can he do to our enemies?

After conferring with both the American president and the prime minister, Weston is determined to use “The Fox” and his talents to the advantage of the two nations. But doing so places the boy on a geopolitical minefield. Adrian must stay one step ahead of multiple invisible enemies, all while finding a way to utilize the most powerful – and most unpredictable – weapon of all.

With his trademark research and deep knowledge of the rules and practices of international intrigue, Forsyth takes on tomorrow’s threats in this race-against-the-clock thriller. 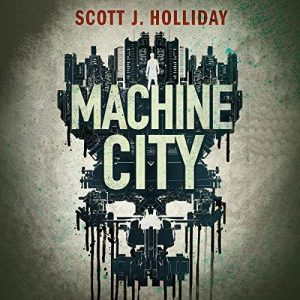 Machine City by Scott J. Holliday
Narrated by J D Jackson
Publisher Brilliance Audio
In this unputdownable thriller set in the new future, a detective enters the mind of a killer to find a missing child.

To ex-detective John Barnes, the machine is a dangerous and abhorrent addiction. The criminal thoughts it embedded in his brain helped him stop a serial killer, but they left him dazed – with pounding, murderous impulses. Having turned in his badge to salvage what’s left of his psyche, Barnes must return to the darkness at the request of his former partner. A little girl has gone missing. So has Adrian Flaherty, the detective in the kidnapper’s shadow.

And only Barnes can hear the clues.

But the trail is more dizzying and more personal than he feared. The voices are revealing a secret only Flaherty could have known. They’re also telling Barnes that he doesn’t have long to live. To find the girl, he must listen closely. Because the clock is ticking…and Barnes’s mind is going fast. 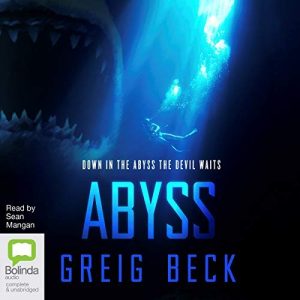 The monster shark she once encountered was a remnant of the ancient world – one that had escaped an underwater lair previously sealed off for millions of years. At great cost, Cate and her allies had killed the beast. So, no more ghosts, no more shadows. All gone.

Or so Cate thought.

A research ship is sound-blasting the deep seabed looking for petroleum signatures. But in doing so they disturb something that has been hiding in the trenches for countless millennia.

What Cate thought was dead rises from the cold depths of hell. She, Jack Monroe, a Russian billionaire, and her team of marine biologists are forced once more to enter the abyssal zone of the deepest ocean trenches, to confront a creature from the Earth’s distant past. 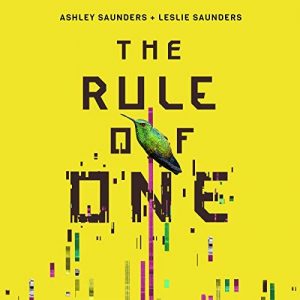 The Rule of One by Ashley Saunders, Leslie Saunders
Narrated by Karissa Vacker
Publisher Brilliance Audio
In their world, telling the truth has become the most dangerous crime of all.

In the near-future United States, a one-child policy is ruthlessly enforced. Everyone follows the Rule of One. But Ava Goodwin, daughter of the head of the Texas Family Planning Division, has a secret – one her mother died to keep and her father has helped to hide for her entire life.

She has an identical twin sister, Mira.

For eighteen years Ava and Mira have lived as one, trading places day after day, maintaining an interchangeable existence down to the most telling detail. But when their charade is exposed, their worst nightmare begins. Now they must leave behind the father they love and fight for their lives.

Branded as traitors, hunted as fugitives, and pushed to discover just how far they’ll go in order to stay alive, Ava and Mira rush headlong into a terrifying unknown. 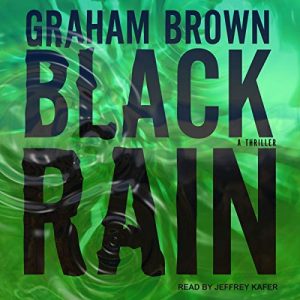 Covert government operative Danielle Laidlaw leads an expedition into the deepest reaches of the Amazon in search of a legendary Mayan city. Assisted by a renowned university professor and protected by a mercenary named Hawker, her team journeys into the tangled rain forest – unaware that they are replacements for a group that vanished weeks before, and that the treasure they are seeking is no mere artifact but a breakthrough discovery that could transform the world. 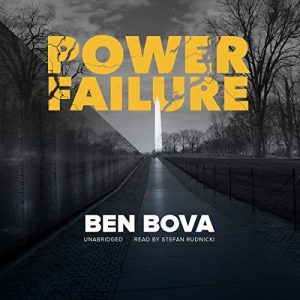 Dr. Jake Ross came to Washington to try to make a difference, but he’s learned the only way to get something done in Washington, assuming your ideals survive the corrosive atmosphere, is to gather power. Ross has gathered a great deal riding in the wake of Frank Tomlinson. But now Tomlinson has decided to shoot for the moon. If they win, they get it all. If they lose, the game is over for Jake Ross.

The Power trilogy combines the political thriller with nuts-and-bolts near-future science fiction. Bova’s vision of a future powered by solar satellite transmission is tantalizingly within reach. 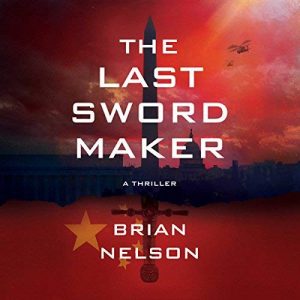 The Last Sword Maker by Brian Nelson
Publisher Blackstone Audio, Inc.
In the high mountains of Tibet, rumors are spreading. People whisper of an outbreak, of thousands of dead, of bodies pushed into mass graves. It is some strange new disease … a disease, they say, that can kill in minutes.

The Chinese government says the rumors aren’t true, but no one is allowed in or out of Tibet.

At the Pentagon, admiral James Curtiss is called to an emergency meeting. Satellite images prove that a massive genocide is underway, and an American spy has made a startling discovery. This is no disease. It’s a weapons test. Chinese scientists have developed a way to kill based on a person’s genetic traits. But that is only the tip of the iceberg. The success of their new weapon proves that the Chinese are nearing “Replication” – a revolutionary breakthrough that will tip the global balance of power and change the way wars are waged.

Now the US must scramble to catch up before it is too late. Admiral Curtiss gathers the nation’s top scientists, including a promising young graduate student named Eric Hill who just might hold the missing piece to the replication puzzle. Soon Hill and his colleague Jane Hunter are caught up in a deadly game of sabotage as the two nations strive to be the first to reach the coveted goal. But in their headlong race, they create something unexpected … something the world has never seen and something more powerful than they had ever imagined.

A Publishers Weekly pick of 2018’s Mysteries and Thrillers’ “Not the Usual Suspects”. 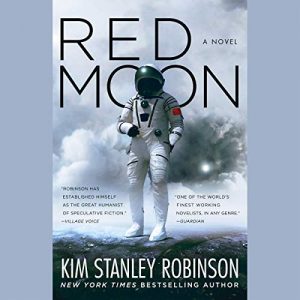 It is 30 years from now, and we have colonized the moon.

American Fred Fredericks is making his first trip, his purpose to install a communications system for China’s Lunar Science Foundation. But hours after his arrival he witnesses a murder and is forced into hiding.

It is also the first visit for celebrity travel reporter Ta Shu. He has contacts and influence, but he, too, will find that the moon can be a perilous place for any traveler.

Finally, there is Chan Qi. She is the daughter of the Minister of Finance, and without doubt, a person of interest to those in power. She is on the moon for reasons of her own, but when she attempts to return to China, in secret, the events that unfold will change everything – on the moon, and on Earth. 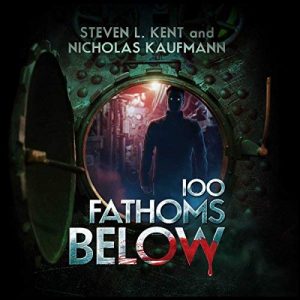 The depth at which sunlight no longer penetrates the ocean.

1983. The US nuclear submarine USS Roanoke embarks on a classified spy mission into Soviet waters. Their goal: to find evidence of a new, faster, and deadlier Soviet submarine that could tip the balance of the Cold War. But the Roanoke crew isn’t alone. Something is on board with them. Something cunning and malevolent.

Trapped in enemy territory and hunted by Soviet submarines, tensions escalate and crew members turn on each other. When the lights go out and horror fills the corridors, it will take everything the crew has to survive the menace coming from outside and inside the submarine.

Combining Tom Clancy’s eye for international intrigue with Stephen King’s sense of the macabre, 100 Fathoms Below takes listeners into depths from which there is no escape.