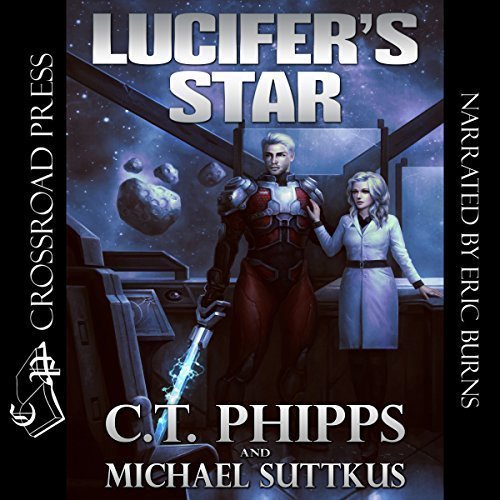 A Blast of a Book

For some reason recently, I haven’t been reading as many science fiction books as I used to.  I think that Lucifer’s Star might change that for me.  It was an absolute blast to read with twists and turns that could make even the most cybernetically-enhanced stomach turn.

C.T. Phipps is quickly becoming an everyday name in my bookshelves.  The best part is that it’s not in just one genre.  He’s written books in numerous genres, including ones that I wouldn’t normally read that I’ve absolutely loved.  You can easily add Lucifer’s Star to the list of books from Phipps that I’ve loved.

Another aspect that I found myself enjoying was that pretty much every character lied in some way, shape, or form — and this is pointed out numerous times by Mass to the point where he is getting extremely tired of it (which gave me a good chuckle).  The irony is that the lying and deceit ended up being a major part of the book allowing me to get lost (literally, at one point I felt like I was reading a part “who done it?” book).  Each character had their own little (or big) lie and it played itself out by the end of the book.

This might be my favorite Phipps book to date — it’s definitely up there with Agent G (which I absolutely loved).  I have not read his Supervillainy series, but I might have to give it a try after how much I’ve loved each one of his books so far.

I’m eagerly awaiting the next book in this series and I hope that it’s just as fun as Lucifer’s Star was.  With that said, this book didn’t feel like a “part 1 of 6” book either.  This had a nice story arc that plays itself out throughout.

The narration for Lucifer’s Star was done by Eric Burns who I thought did a nice job with it. I love when I can just put a book on and be transported to another world.  Phipps & Suttkus combined with Burns’ narration allowed me to do that.

From the bestselling author of The Rules of Supervillainy:

Cassius Mass was the greatest star pilot of the Crius Archduchy. He fought fiercely for his cause, only to watch his nation fall to the Interstellar Commonwealth. It was only after that he realized the side he'd been fighting for was the wrong one. Now a semi-functional navigator on an interstellar freight hauler, he tries to hide who he was and escape his past. Unfortunately, some things refuse to stay buried and he ends up conscripted by the very people who destroyed his homeland.

LUCIFER'S STAR is the first novel of the Lucifer's Star series, a dark science fiction space opera set in a world of aliens, war, politics, and slavery.

Also by this author: Cthulhu Armageddon, Agent G: Infiltrator, The Tower of Zhaal, Straight Outta Fangton, I Was a Teenage Weredeer, An American Weredeer in Michigan, Lucifer's Nebula, Brightblade
Also in this series: Lucifer's Nebula

The Last Astronaut by David Wellington (