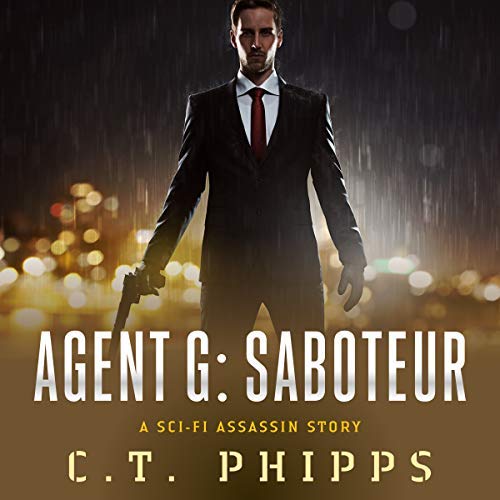 It’s really hard to get “Hitman” out of my head when I’m reading an Agent G book. Part of it is because of the bio-roids (spelling?) part and another part is how they are basically programmed to kill any target they are given.

But in all seriousness Saboteur feels like a love letter to the spy thriller.  It combines a ton of different stories into one including Mr. and Mrs. Smith (G and S), Spy vs Spy, along with some aspect of Bond and Bourne thrown in for good measure.  Shake all of these up, throw in a ton of sarcasm and wit and you have Agent G.

(This part could contain a brief spoiler) There were a few parts of Saboteur that threw me for a loop, and honestly, I can’t dive into any of them for fear of giving the plot away.  But I’ll mention some hints.  Brother, double-cross, and “who do you really work for?” to just name a few.  I don’t think that any of them on their own will give any major things away, but I’m sorry if it spoils anything for you.

Phipps writes in all sorts of genres and each one of them feels like a love letter to that genre in a way, but these Agent G books are just so damn good. The marriage of science fiction and spy thriller really sets the Agent G series apart in my eyes. I think that the near future and black-tech in them really hit some need that I have in books.  They are far enough into the future for G to be a real functioning… thing but they are still dealing with some of the same crap that we’re dealing with today. On top of that G is fighting for his life and the lives of other letters while trying to expose anyone he can in an attempt to clear up all of the bribery and hush money.

Overall, I thought that Saboteur was a blast of a story from beginning to end that kept me on the edge of my seat.  Phipps wrote a story that felt real even though it was set in the future. And Kafer’s performance took it to the next level.

From the best-selling author of the Supervillainy Saga comes the sequel to Agent G: Infiltrator.

Agent G has left the service of the International Refugee Society, the world's biggest provider of murder for hire, in order to work for the US government. Unfortunately, they are sending him after his former employers, and they know him as well as he knows them.

The clock is ticking, though, until the Society's remaining leadership starts eliminating their opponents and attempts to seize control of the presidency. A traitor is also providing them with all the information they need to survive until their puppet is in power.

Will G and his allies survive the purge?

Sometimes it doesn't pay to be a cyborg spy.