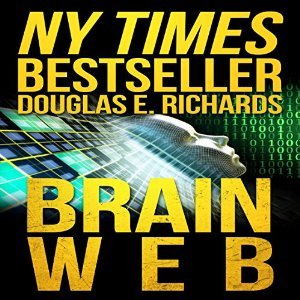 A great continuation of the series

As I’ve written in numerous other reviews, Douglas E. Richards is a master of his craft.  In my opinion, he writes technothrillers better than anyone else writing today. BrainWeb was no different.

Picking up where Mind’s Eye left off, we are once again in the midst of someone who can surf the web from his head and read other people’s minds if they get too close.  While this may sound insane, the way that Richards writes the story had me tripping over every word to get to the end.

Nick Hall is a really great protagonist.  He’s incredibly likable and understands that what he has is a gift.  He tries to only use his powers for good and tries not to use them against his friends and colleagues.

The opening scene had me glued to my seat.  The fictional attack that Richards writes about drew me in so quickly that I didn’t even know an hour had passed before I felt like I took a breath.

What ends up happening to Nick and his friends in BrainWeb is thriller writing at it’s finest.  Every scene showed just how fragile the system that they were using was and it felt like there were bad guys lurking around every corner.

Overall, if you enjoyed the first Nick Hall book, I would almost guarantee that you’ll enjoy this one.  If you like a good technothriller, check out the first book first and then come back to BrainWeb for more.

When the Academy Awards become the target of a brutal terror attack, only one man can stave off massive bloodshed.

MIND'S EYE, the novel that introduced Nick Hall, was a runaway Kindle bestseller. Now Hall returns in a riveting stand-alone thriller, set in an Internet future that is just around the corner. From the New York Times bestselling author of WIRED.

Nick Hall, an unwilling recipient of brain implants, can surf the Web with his thoughts and read minds. And while this makes him one of the most formidable men on earth, he is determined to stay off the grid.

But when terrorists seize control of the Academy Awards and vow to butcher the world's most beloved stars, one by one, in front of an international television audience, Hall is forced to reveal his astonishing capabilities.

Now, power players around the world will stop at nothing to capture him. And as the secretive group working with Hall begins to unravel, he is sure of only two things: he has been betrayed by someone close to him. And the stakes he is playing for could not be any higher . . .

Based on actual research on thought-controlled Web surfing, BrainWeb is a smart thriller that raises a number of intriguing possibilities about a future that is rapidly approaching.