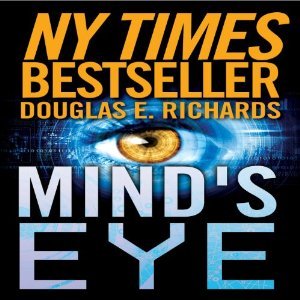 A shocking technothriller written by a master.

Mind’s Eye is a book about Nick Hall.  Hall wakes up in a dumpster with no memory of who he is or how he got there.  What he discovers next will shock himself and you as the reader.  Nick can read other people’s minds and thoughts.  While incredibly interesting, this is also full of incredible pain and annoyance as he cannot turn it off.  He also realizes that he can surf the web within his own head.  When he thinks of a question — the answer pages just appear in his “vision” like a heads up display.  There’s one problem–Nick is being hunted.  Someone out there wants him dead.

The narration was done by Adam Verner. I’ve listened to other titles from Verner before and really enjoyed his tone and narration style.  He is definitely one of those narrators that add to the story instead of taking away from it.  Verner gets through incredibly technical and scientific sentences and paragraphs with ease.  Using his ninja-like tongue to maneuver this complex, yet compelling novel.

So, I had to take a few days to gather my thoughts on this because I enjoyed it so much.  I don’t know if it was because it reminded me so much of a Michael Crichton novel, or if I had just been looking for a new author to fall in love with.  But man, did I really enjoy this novel.  Mind’s Eye started out a little confusing, purposefully confusing the reader because Hall was also confused.  As this book picked up though the pacing was blazing.  There were a few times where I thought “he can’t possibly take this up another notch” and he did.  This book goes to 11… and then some.

Mind’s Eye is a story with a lot of “hey that sounds really cool” ideas that are paved as both groundbreaking and terrifying.  The way that Richards walks this tightrope is incredible.  As a reader, I love being surprised and believe me when I tell you — this book was full of them.

For those who enjoy a little romantic side to a thriller, this has some of that too.  The woman that he literally walks in on (in her office, nothing dirty) and his chemistry is well thought out, enjoyable, and even a nice relief to the right left combo this book provides.

Douglas E. Richards is easily a new favorite author of mine. Look for more reviews coming in the near future from Brian’s Book Blog (after reading these last two, I bought 2 others back to back.)

When Nick Hall wakes up in a dumpster - bloodied, without a memory, and hearing voices in his head - he knows things are bad. But they're about to get far worse. Because he's being hunted by a team of relentless assassins. Soon Hall discovers that advanced electronics have been implanted in his brain, and he now has two astonishing abilities. He can surf the web using thoughts alone. And he can read minds. But who inserted the implants? And why? And why is someone so desperate to kill him?

As Hall races to find answers, he comes to learn that far more is at stake than just his life. Because his actions can either catapult civilization to new heights - or bring about its total collapse.

Extrapolated from actual research on thought-controlled web surfing, Mind's Eye is a smart, roller-coaster ride of a thriller. One that raises a number of intriguing, and sometimes chilling, possibilities about a future that is just around the corner.

Also by this author: Split Second, The Cure, Game Changer, BrainWeb
Also in this series: BrainWeb 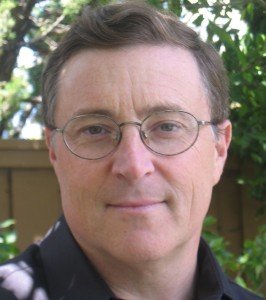