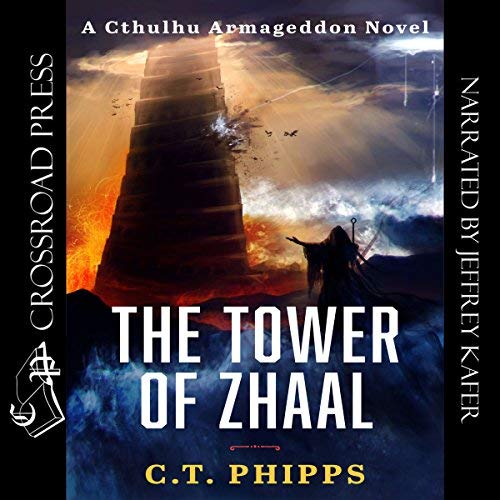 Buckle Your Seatbelts, This Is Action Packed

I don’t know why I didn’t see a sequel coming from the first book, but I’m really glad that Phipps wrote one.  The benefit of a sequel is that you’ve already had time to explain out certain characters and their characteristics, but it also allows you to explain the world a little bit allowing you to jump right into the continuation of a story.

Well, Phipps did that for sure.  I thought that Cthulhu Armageddon was non-stop action.  I would be wrong compared to Tower of Zhaal.  Holy cow, I need to catch my breath from this one.  Another thing that I really enjoyed was the addition of new characters.  Phipps was able to weave new people into the story without them feeling like complete outsiders.

The story itself from the first book wasn’t normally my cup of tea, but darn it did I still enjoy it.  The Tower of Zhaal was the same way.  I went into it with an open mind and having read the first book.  I wasn’t sure what was going to happen in this book, but I was bucked up for the ride.  I’m glad that I was buckled up though because this one took me for a ride.

Anytime you can get the amazing Jeffrey Kafer to narrator your books, you already have an edge up on the competition.  But when you combine Kafer’s great narration of this book with Phipps great writing you have a winner.

The Tower of Zhaal was even more enjoyable than Cthulhu Armageddon and took me on a roller coaster ride that I wasn’t sure I was coming back from.

It has been a year since John Henry Booth's exile from New America and the fall of the Black Cathedral. Cursed with a slow transformation into a monster, he has begun a doomed relationship with fellow escapee Mercury Halsey as they seek some way to arrest his transformation.

Dubious hope arrives in the form of the University, the deranged scientists and cultists descended from the staff of Miskatonic University. Except, their offer of help comes at a price. Having sold themselves to ancient aliens called the Yith, they wish John and Mercury to join a group of rogues in hunting down a wayward member of their faculty: a man who intends to release the last of the sleeping Great Old Ones on an already ravaged planet. If they're telling the truth, John and Mercury will be heroes. If.

The Tower of Zhaal is the second novel of the Cthulhu Armageddon series, a post-apocalypse continuation of H.P. Lovecraft's popular Cthulhu Mythos.

One thought on “Audiobook: The Tower of Zhaal (Cthulhu Armageddon #2) by C.T. Phipps (Narrated by Jeffrey Kafer)”