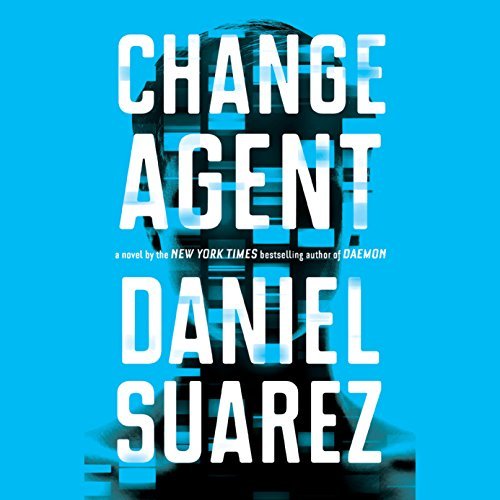 A Terrifying Look Into Our Future

I really enjoyed Daemon by Daniel Suarez so when I saw that Change Agent was coming out, I had to get it.  I pre-ordered it from Audible (something I rarely do) and the day that it arrived I was lucky that I was just about to finish the last book I started.

Change Agent is a story about Kenneth Durand an Interpol agent who is mysteriously changed into someone that he is not.  Not just a small change either, but a full change.  So much so that he quickly realizes that he is a wanted man and that this will forever change the way that the police will be able to solve crimes.

There are two authors that I read that remind me of Michael Crichton.  Douglas E Richards and Daniel Suarez.  Suarez is able to weave what is going on today with what he thinks will come in the future and it’s terrifying.  I work in a technology firm and he’s not wrong with what he’s thinking.  I wouldn’t be surprised if a lot of what was written in Change Agent comes true at one time or another.

Durand as a character allowed the reader to follow along with someone as their own opinions of people and things they fought for so long was changing.  Kenneth grew many times throughout Change Agent and really became one of the more dynamic characters I’ve read in a long time.

The overall story was one of the best I’ve read this year.  It kept me wondering throughout and I honestly couldn’t put this book down.  I kept saying “one more chapter” late into the night. Each chapter brought me closer to the end, but I promise that this book will have a hold on my mind for a while.

A fast-paced technothriller on par with every Crichton novel I’ve ever read, maybe even a little more terrifying.  Suarez took things that are real today and showed us what could happen in the future if we’re not careful.

On a crowded train platform, Interpol agent Kenneth Durand feels the sting of a needle – and his transformation begins….

In 2045 Kenneth Durand leads Interpol’s most effective team against genetic crime, hunting down black market labs that perform “vanity edits” on human embryos for a price. These illegal procedures augment embryos in ways that are rapidly accelerating human evolution – preying on human-trafficking victims to experiment and advance their technology.

With the worlds of genetic crime and human trafficking converging, Durand and his fellow Interpol agents discover that one figure looms behind it all: Marcus Demang Wyckes, leader of a powerful and sophisticated cartel known as the Huli jing.

But the Huli jing have identified Durand, too. After being forcibly dosed with a radical new change agent, Durand wakes from a coma weeks later to find he’s been genetically transformed into someone else – his most wanted suspect: Wyckes.

Now a fugitive, pursued through the genetic underworld by his former colleagues and the police, Durand is determined to restore his original DNA by locating the source of the mysterious – and highly valuable – change agent. But Durand hasn’t anticipated just how difficult locating his enemy will be. With the technology to genetically edit the living, Wyckes and his Huli jing could be anyone and everyone – and they have plans to undermine identity itself.