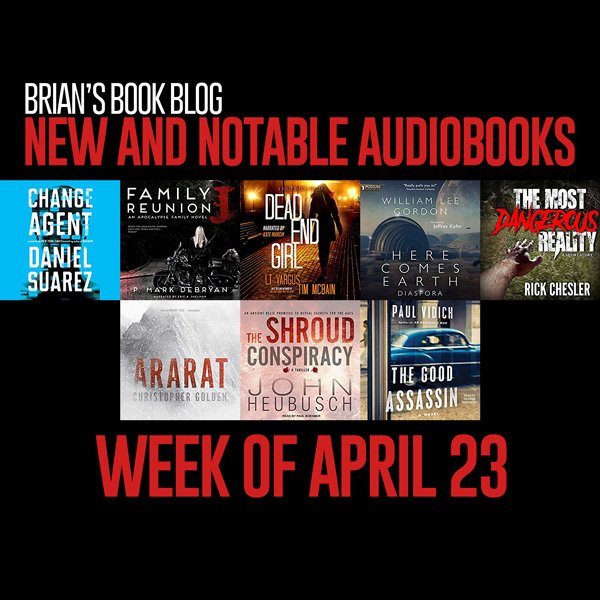 Here are the books that were released the week of April 23rd that I think are new and notable. I’ve mentioned any Whispersync deals, if more come up after posting, please leave a comment and let me know! 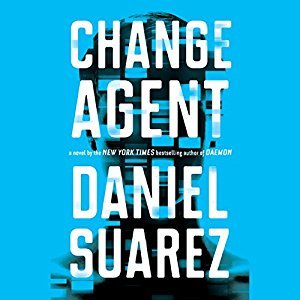 On a crowded train platform, Interpol agent Kenneth Durand feels the sting of a needle – and his transformation begins….

In 2045 Kenneth Durand leads Interpol’s most effective team against genetic crime, hunting down black market labs that perform “vanity edits” on human embryos for a price. These illegal procedures augment embryos in ways that are rapidly accelerating human evolution – preying on human-trafficking victims to experiment and advance their technology.

With the worlds of genetic crime and human trafficking converging, Durand and his fellow Interpol agents discover that one figure looms behind it all: Marcus Demang Wyckes, leader of a powerful and sophisticated cartel known as the Huli jing.

But the Huli jing have identified Durand, too. After being forcibly dosed with a radical new change agent, Durand wakes from a coma weeks later to find he’s been genetically transformed into someone else – his most wanted suspect: Wyckes.

Now a fugitive, pursued through the genetic underworld by his former colleagues and the police, Durand is determined to restore his original DNA by locating the source of the mysterious – and highly valuable – change agent. But Durand hasn’t anticipated just how difficult locating his enemy will be. With the technology to genetically edit the living, Wyckes and his Huli jing could be anyone and everyone – and they have plans to undermine identity itself. 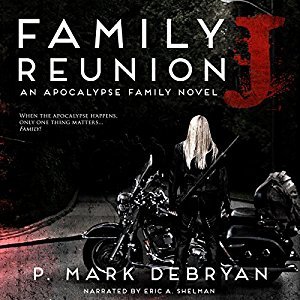 When the apocalypse happens only one thing matters…family.

The South African flu had put the fear of God into the world. But the press and the government assured one and all that a revolutionary nanovaccine developed by Dr. Julian Ruegg had stopped the outbreak in its tracks.

The vaccine had stopped the flu, yes. But two weeks later a strange and deadly side effect became apparent, a side effect worse than the flu – far, far worse. Jay Brant, mother of two and ex-FBI fingerprint analyst, is trying to survive and get back to her kids as society unravels around her. Nothing matters more than getting her son Mark and his wife to safety in West Virginia, and then rescuing her daughter Auddy, who lives in South Carolina.

Jay had put her husband on a plane bound for his family reunion in Seattle, then set off on a road trip to the eastern panhandle of West Virginia. Her job requires the trip once every two weeks, and the four-hour drive and overnight stay are completely routine.

As the day unfolds, she begins to realize that this trip will be anything but routine. 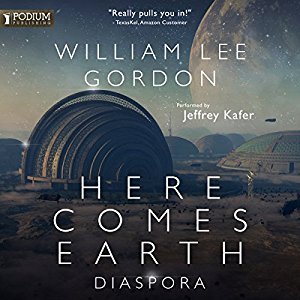 Earth’s Diaspora is well underway and the colonies are flourishing. There are Dynasties of The Accord, however, that resent Earth’s expansion. Charli Morgan and Lucca Spelini each lead their respective teams from colony to colony, preventing interference and keeping the peace.

Standing up to the Dynasties is one thing, but what happens when Lower Houses of The Accord start butting in?

Dr. Mark Spencer hasn’t been heard from in years until he suddenly shows up one day. The news he brings…isn’t good. 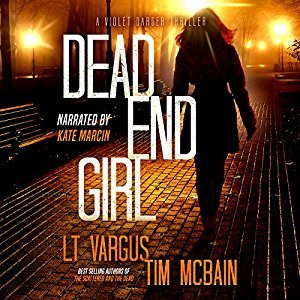 Her body is broken. Wrapped in plastic. Dumped on the side of the road. She is the first. There will be more.

A serial killer stalks women in rural Ohio. He is deranged but brilliant, known only by the grotesque nickname the media has given him – The Doll Parts Killer. The name is apt. He dismembers his victims and leaves them in garbage bags in public places. A residential neighborhood. Next to a roller rink. Behind a Burger King.

The investigation is a disaster. No physical evidence. Unreliable witnesses. To make matters worse, the FBI has lost contact with the star profiler working the case. Now rookie agent Violet Darger gets the most important assignment of her career.

When Darger travels to Ohio, she brings along demons of her own. Her last case ended in tragedy. The death of a 16 year old girl. Darger still has nightmares about the bloody scene, still has panic attacks when she remembers. The trauma shattered her core beliefs.

Now she faces a killer unlike anything she’s seen. Aggressive. Territorial. If she fails, more will die. He will kill again and again.

Will this case restore her faith? Or push her over the edge?

The victims harbor dark secrets. The clues twist and writhe and refuse to keep still. And the killer watches the investigation on the nightly news, gleeful to relive the violence, knowing that he can’t be stopped. 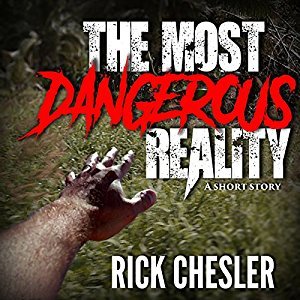 The Most Dangerous Reality by Rick Chesler
Narrated by John Dunleavy

A newly minted M.D. confronted with massive student loan debts decides to put himself to the ultimate challenge: volunteer to be hunted for sport by a wealthy outdoorsman on a remote tropical island. If he is still alive after three days, his financial problems will be solved.

What the doctor doesn’t know is that the “sportsman” contracting him for the hunt is an actor as part of a reality TV show. 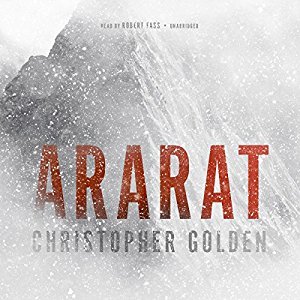 Christopher Golden’s Ararat is the heart-pounding tale of an adventure that goes wrong – on a biblical scale. When an earthquake reveals a secret cave hidden inside Mount Ararat in Turkey, a daring, newly engaged couple are determined to be the first ones inside…and what they discover will change everything.

The cave is actually a buried ancient ship that many quickly come to believe is Noah’s Ark. When a team of scholars, archaeologists, and filmmakers make it inside the ark, they discover an elaborate coffin in its recesses. Inside the coffin, they find an ugly, misshapen cadaver – not the holy man they expected, but a hideous creature with horns. Shock and fear turn to horror when a massive blizzard blows in, trapping them thousands of meters up the side of a remote mountain. All they can do is pray for safety. But something wicked is listening to their prayers…and it wants to answer. 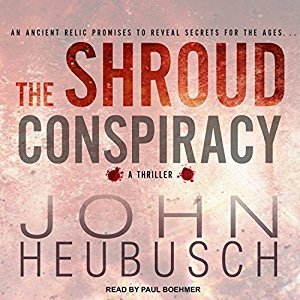 The Shroud Conspiracy: A Novel by John Heubusch
Narrated by Paul Boehmer

Throughout his career, forensic anthropologist and outspoken atheist Dr. Jon Bondurant has investigated many religious artifacts said to be real, but he knows better. So when he is invited by the Vatican to examine the Shroud of Turin, said to be the burial cloth that covered the body of Christ, he is delighted for the opportunity to prove once and for all that the shroud is a fake. But when he meets Domenika Josef, the beautiful and devout Vatican representative, he realizes his task will not be as straightforward as he once imagined.

As Bondurant and his team examine every element of the shroud, he and Domenika begin to see each other in a whole new light. As the evidence about the origin of this highly contested piece of fabric starts to pile up, he begins to realize that he’s been seeing a lot of things incorrectly. But when a sample of the blood from the shroud – believed to be the real blood of Jesus Christ – vanishes, he realizes his problems are just beginning. The DNA traces in that sample could have earth-shattering consequences if they fall into the wrong hands.

When Domenika vanishes, Bondurant is caught in a globe-spanning chase to rescue the women he loves – and stop the evil forces who have their own motives for bringing on the Second Coming. 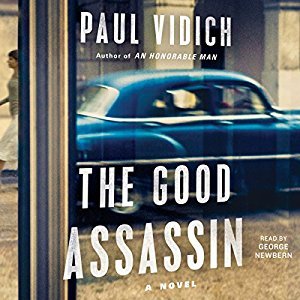 The Good Assassin: A Novel by Paul Vidich
Narrated by George Newbern

Paul Vidich follows up his acclaimed debut spy thriller with a suspenseful tale of Cold War espionage set in 1950s Cuba, as foreign powers compete to influence the outcome of a revolution.

Former CIA agent George Mueller arrives in Havana in August 1958 – the last months before the fall of Cuban dictator Fulgencio Batista – to look into the activities of Toby Graham, a CIA officer suspected of harboring sympathies for the rebel forces fighting the unpopular Batista regime. Mueller knew Graham as an undergraduate, and later they were colleagues in Berlin fighting the Soviet NKVD. Under the guise of their long acquaintance, Mueller is recruited to vet rumors that Graham is putting weapons, covertly provided by the CIA to Batista, into the hands of Castro’s forces. Public exposure of the CIA weapons mission and the activity of one rogue agent threaten to embarrass the agency.

Mueller uncovers a world of deceit as the FBI, CIA, and State Department compete to influence the outcome of the revolution in the face of the brutal dictatorship’s imminent collapse. Graham, meanwhile, is troubled by the hypocrisy of a bankrupt US foreign policy and has fallen in love with a married American woman, Liz Malone.

Paul Vidich has written a powerful story of ideals, passions, betrayals, and corrupting political rivalries in the months before Castro’s triumphant march into Havana on New Year’s Day 1959. This sequel showcases the widely praised talents of Paul Vidich, who, Booklist says, “writes with an economy of style that acclaimed novelists might do well to emulate”.