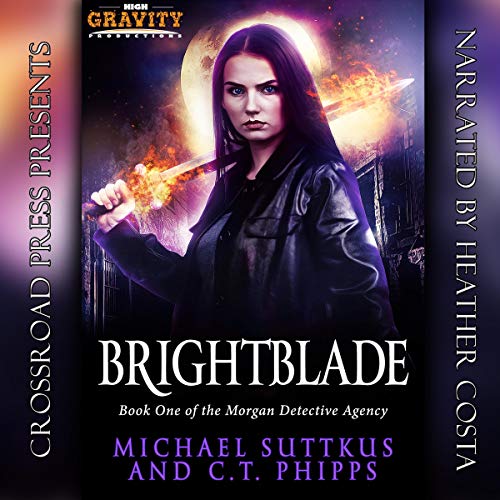 Another Great Entry Into This Universe

Every time I think I have the worlds of C.T. Phipps figured out – he’s able to throw and entire new book into that world and surprise me. Brightblade was a new entry into the same universe as the The Bright Falls Mysteries and Straight Outta Fangton – so the setting is semi-familiar.  Some of the characters cross-over. It has that comfort of a familiar universe, but seeing it from a different perspective.  Like re-visiting your home town after you’ve moved away.  You see the grit and the good.

The character development of Ashley Morgan was obviously the star of this audiobook.  Suttkus and Phipps are able to create such interesting and easy-to-root-for characters in their worlds.  Ashley was no different.  She was different and a little bit rough to start, and as the story progresses you start to like her more and more.  She does things that feel correct for her character while also moving the story along.  She wasn’t as witty or smart-alecky as the other characters I’m used to reading from these authors – but that’s not to say that that book didn’t have its comedic moments.  There were just less of them in Brightblade than in other entries in this universe.

There were two specific parts that really stood out to me where the comedy shines through.  One was a moment where they were talking about Jane Doe (and they were talking about what he name was and that she was a Weredeer).  The laughter and jokes there were just right and exactly how someone who didn’t know Jane would react.  The other was in the description of a specific way that certain female characters are portrayed on Fantasy (especially Urban Fantasy) novels. I got a good chuckle out of that one.

Obviously, as I just stated above – character development is where these authors shine.  The action is nothing to laugh at either.  They are able to write short and succinct action scenes that feel like they last as long as they should.  There’s no drawn out shoot outs, magic displays, and other fantasy elements.  It’s right to the point while still being entertaining.

Overall, I thought that Brightblade was a great entry into this universe and an interesting story to listen to.  The audiobook absolutely flew by due to the great narration of Heather Costa.  I just felt like she took me right into that world and wouldn’t let me go until the book ended. A great performance.

Psychic. Superhero. Spy. Detective. Bounty hunter. Ashley Morgan has been many things and failed at all of them. The 28-year old has her whole life ahead of her but has already resigned herself to working a dead-end job bringing in the debt-ridden supernatural criminals of New Detroit.

A chance encounter with the vampire sheriff reveals a secret that motivates her to change her life forever: Her long-missing brother Arthur is alive (in a manner of speaking).

Ashley sets out on a quest to not only find him but also deal with old lovers, treacherous criminals, a magic sword, and a quest to raise an ancient vampire from the dead.

Brightblade is set in the same world as the Red Room series, The Bright Falls Mysteries, and Straight Outta Fangton.

Hell Holes: What Lurks Below by Donald F