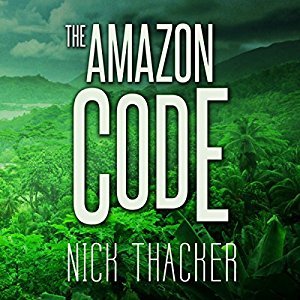 Harvey “Ben” Bennett is at it again

A company is just on the verge of perfecting something that was thought to be impossible — recording dreams.  When they stumble across a hidden message in certain recordings.  Not knowing where to turn next, she enlists the help of some of her close friends to figure out what these hidden messages are actually trying to tell her.

The narration for The Amazon Code was done by Mike Vendetti, who has done numerous other Nick Thacker audiobooks.  They work together for a reason and it shows.  Vendetti is able to take Thackers words and make them jump off of the page.  Sure, it’s not “full cast” ensemble recording or anything, but Vendetti really does help Thacker’s work go from good to great.

I’m thrilled to see more from Harvey Bennett. I really liked him as a character in The Enigma Strain (which I LOVED by the way).  And I’m glad to see him back in a slightly different take on a story.

Thacker is one of my all-time favorite authors.  Everything he comes out with has been well received by me, and with good reason. He knows how to write amazingly thought out fast-paced thrillers.

Overall, The Amazon Code was incredibly enjoyable. The action was fast-paced, and the story flowed really well.  It was definitely a roller coaster climbing towards the climax.  The final pages/minutes of the book just flew by as I tried to figure out what was going to happen.  I love a book that can do that without leaving me feeling unsatisfied.