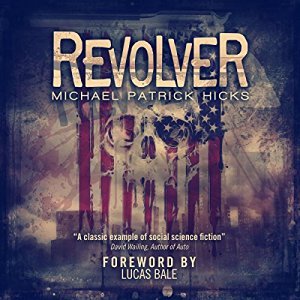 Warning, Revolver contains pretty much everything that people will find offensive:  Language, Mentions of Rape, and belittling of women. With that being said, all of it (minus the language) was written for a reason.

The world has been turned on its head and Cara is given the chance of a lifetime to give her family a much-needed financial break.  She just has to star on the crowd-funded hit TV series Revolver…

Patricia Santomasso provides the narration for Revolver and does a perfect job.  She took an already great book and made it amazing.  Her performance will stick with me.  The story was good, but Santomasso made it great.

Revolver is a perfect short story/novella to read right now.  The political extremists are gaining more and more power and they aren’t easily ignored anymore.  Revolver tells the story of what would happen if we let this extremism go too far.  And wow was it good.

I had to write my warning because this book will offend people, I actually think that it was meant to.  But it did it in a way that really makes you think.  Revolver is a big “what if” book that will leave you feeling raw and full of emotion.

I actually can’t think of the last time I read a book this short that left that much of an impression on me.  It’s just proof that you don’t need 400 pages to make someone feel something.  Just a great premise and a better narrative voice.

Cara Stone is a broken woman: penniless, homeless, and hopeless. When given the chance to appear on television, she jumps at the opportunity to win a minimum of $5,000 for her family.

The state-run, crowdfunded series, Revolver, has been established by the nation's moneyed elite to combat the increasing plight of class warfare.

There's never been a Revolver contestant quite like Cara before. The corporate states of America are hungry for blood, and she promises to deliver.

Also by this author: From The Ashes, Mass Hysteria, Consumption, Broken Shells

Michael Patrick Hicks is the author of the science fiction novels Convergence, an Amazon Breakthrough Novel Award 2013 Quarter-Finalist, and Emergence. His work has appeared in several anthologies, and he has written for the websites Graphic Novel Reporter and Audiobook Reviewer. In between compulsively buying books and adding titles that he does not have time for to his Netflix queue, he is hard at work on his next story.

To stay up to date on his latest releases, join his newsletter, Feed: http://bit.ly/1H8slIg