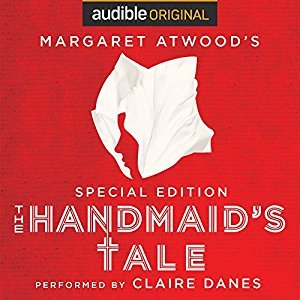 An enjoyable dystopian with a lot of truth

With the release of the series on Hulu that was based on this book, I decided to give the book a listen before watching any of the episodes.  I told my wife to start it without me in case I didn’t like the book or couldn’t get through it.

I did have a hard time in the beginning of The Handmaid’s Tale.  Atwood’s writing style is the epitome of the books teenagers are “forced” to read in high school that makes them feel like they don’t enjoy reading.  It was choppy and incredibly descriptive.  For every description of something that Offred saw there were up to 5 lines about it in the book.

Honestly, that is the reason that I gave this a 4 out of 5.  The story is awesome, and being written as long ago as I’m alive — a lot of the main pillars of it are easily seen as coming true sooner rather than later.  I believe that Atwood wrote this as an enigmatic “future” tale, not putting a date on it to age it. And it was written well enough that Hulu decided that they wanted to make a series out of it.

The dystopian future that Atwood created was easily what kept me reading this.  It was interesting and deep.  I would read more books about the lead-up and the start of the entire fall from grace. I absolutely loved her descriptions and the way that she left other things up to the reader’s imagination.

I am going to watch the Hulu series with my wife, and I will be doing write up’s about it on here, so if you’re curious about the differences and how “true” to book it is — stay tuned for that.  If you’re curious if you should pick this book up — it really depends on how much you enjoy the story (or the writing).  Some people enjoy long and over-explained diatribes (millions of Stephen King fans for example). But, don’t say I didn’t warn you.

"Are there any questions?" The final line in Margaret Atwood's modern classic, The Handmaid's Tale, has teased and perplexed fans since the book's original release more than 30 years ago. Now, in this Audible Original production, listeners get some of the answers they've waited so long to hear.

Featuring an all-new interview with Professor Piexoto, written by Atwood and performed by a full cast, The Handmaid's Tale: Special Edition is a must-listen for both fans and newcomers alike. Emmy Award winner Claire Danes (Homeland, Temple Grandin) gives a stirring performance of this classic in speculative fiction, where the message (and the warning) is now more timely than ever. In addition to rich sound design that honors the audio origins of Atwood's classic, the special edition also includes a brand-new afterword from the author and an essay written by author Valerie Martin (Mary Reilly, Property).

After a violent coup in the United States overthrows the Constitution and ushers in a new government regime, the Republic of Gilead imposes subservient roles on all women. Offred, now a Handmaid tasked with the singular role of procreation in the childless household of the enigmatic Commander and his bitter wife, can remember a time when she lived with her husband and daughter and had a job, before she lost everything, even her own name. Despite the danger, Offred learns to navigate the intimate secrets of those who control her every move, risking her life for mere glimpses of her former freedom, and records her story for future listeners.

Whether you're a fan of the original novel or someone who has recently discovered it, The Handmaid's Tale: Special Edition will shock, impress, and satisfy all those who listen.

MARGARET ATWOOD, whose work has been published in over thirty-five countries, is the author of more than forty books of fiction, poetry, and critical essays. In addition to The Handmaid’s Tale, her novels include Cat’s Eye, shortlisted for the Booker Prize; Alias Grace, which won the Giller Prize in Canada and the Premio Mondello in Italy; The Blind Assassin, winner of the 2000 Booker Prize; and her most recent, Oryx and Crake, shortlisted for the 2003 Booker Prize. She lives in Toronto with writer Graeme Gibson.