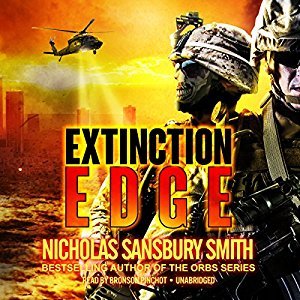 One of the most intense books I’ve ever read

This book was intense.  I mean it, I couldn’t believe how much that Smith crammed into this.  It seemed like anytime it was going to let up, the opposite happened.  Every time I thought someone was safe, they were thrown back into the fire.

The variants and those infected with the Hemorrhage Virus are now evolving incredibly quickly.  To the point where the Delta Force soldiers who think they have everything figure out will be thrown for a loop or two.

The storytelling was a little different in this one.  It’s much more focused on action and involvement, and a lot less on the actual virus.  Granted the ebola virus is mostly gone and what’s left are ever changed variants.

Overall, the book was 100mph almost entirely throughout.  It was fast and gritty and very much needed.  It was so quick I honestly couldn’t believe it was over. And when I say over, I mean continued with the next book in the series.

This is also one of those books that I feel like I’m writing too much of a bland review for, but it’s really hard to write a full-length review without giving every plot point of the book away.

A bioweapon designed to save the world...

A scientific discovery that will alter human history...

And a new threat that will bring humanity to the Edge of Extinction.

The dust from Dr. Kate Lovato's bioweapon has settled. Projections put death counts in the billions. Her weapon was supposed to be the endgame, but it turned a small percentage of those infected with the Hemorrhage Virus into something even worse.

Survivors call them Variants. Irreversible epigenetic changes have transformed them into predators unlike any the human race has ever seen. And they are evolving.

With the doomsday clock ticking, the fractured military plans Operation Liberty - a desperate mission designed to take back the cities and destroy the Variant threat. Master Sergeant Reed Beckham agrees to lead a strike team into New York City, but first he must return to Fort Bragg to search for the only family he has left.

At Plum Island, Kate discovers Central Command may have considerably underestimated the Variant population in New York. As Operation Liberty draws closer, Kate warns Beckham that Team Ghost won't just face their deadliest adversary yet - they may be heading into a trap.