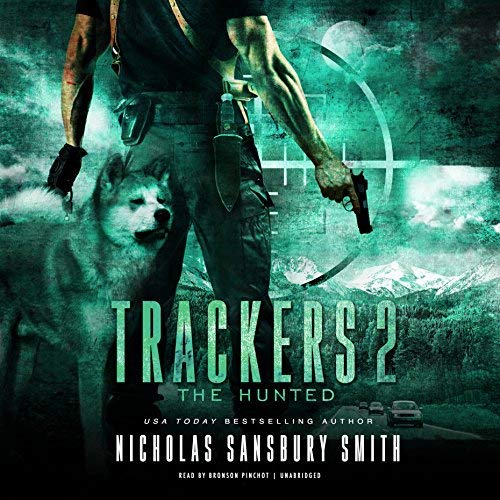 The main story of the second Trackers book involves the newly minted Secretary Of Defenses Charlize Montgomery’s son Ty being kidnapped and held for ransom by a neo-nazi group in their command base The Castle. If you read book one you know that Ty is in a wheelchair and that his mother was searching for help from the government (and from her brother Nathan).

The Hunted dives right into it putting us right back into the story, merely a day or so after the setting of the first book.  Raven, Nathan, Colton, and the town of Estes Park are still recovering from the final murder of the serial killer who was tormenting them in book one.

Without spoiling too much, things have not gone well for the squad that was sent in for Ty and Charlize calls on her brother to help her find Ty. Nathan enlists the help of Raven and they set out to try and find the paramilitary group that has taken Ty.

As far as characters go, the General, aka the leader of the Sons of Liberty, aka a skinhead – might be one of the most hated characters I’ve ever read.  That includes books about serial killers and other terrible people.  Smith wrote him in such a way that just made me hate him on a visceral level. And Pinchot voiced him in a way that I respected.  He was calm, collected, and never raised his voice.  He premeditated everything he did and nothing got under his skin.  But man was he just the worst!

The side-story involving the town of Estes Park (which took a slight back seat to the search for Ty) was also super interesting and I like the drama that Smith included around that. (I can’t really talk about what happened since they are major plot points that I would spoil).

Overall, a great second book that didn’t have the typical sophomore slump that a lot of series have.  Smith was able to craft a world that was easily split into numerous stories – but still kept the characters the same. The cool part about characters like Raven is that they are so versatile (and their own arcs have them growing and changing) that they can be thrown into almost any situation and you not only want to know what happens but you’re rooting for them to get out of it alive.  I feel for Raven almost the exact same way I feel for X in one of Smith’s other series’ Hell Divers.

I’m also happy to report, due to the death of a character in book one. The annoyance that I reported around Pinchot’s narration in book one is completely gone in The Hunted.  There was one character once who felt like was going to slip into the same voice – but thankfully it was a one-time thing and came and went. His narration of book 2 felt much better and definitely redeemed some of my issues with the first book.

The deadly hunt continues in book two of the best-selling Trackers saga.

Five days ago North Korea detonated three nuclear warheads over the United States, triggering an electromagnetic pulse that crippled the country. A second attack destroyed the nerve center of America in a nuclear blast that flattened the nation's capitol. As the government falls apart in the aftermath, the survivors must decide how far they will go to save the ones they love. Police Chief Marcus Colton has struggled to maintain order in the isolated mountain town of Estes Park, Colorado, with the help of expert tracker Raven Spears and stranded pilot Major Nathan Sardetti. Together, they fought the evil terrorizing the town - but new threats are rising, and old rivalries are coming to a head. Charlize Montgomery, newly promoted to Secretary of Defense, is caught between loyalty to her country and love for her son, Ty. When the marines sent to find Ty in Colorado discover a scene of unspeakable carnage, the straightforward rescue mission turns into a deadly chase as the hunters become the hunted.