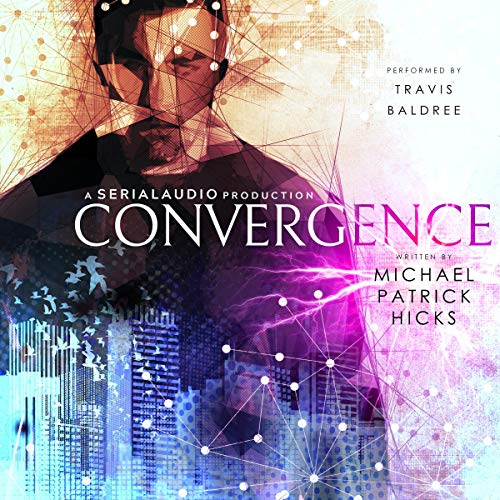 A Great Story Beginning To End

I’ve written a bunch of reviews for basically every 2 chapters of this book on the blog – so I now have to come up with a summary that encompasses the entire book.  Let’s just start it out by saying that I loved it. If you want to see those check them out here.

The main character was one of those I shouldn’t like him but I do kind of guys.  He could rub you the wrong way one moment and then totally redeem himself in the next.  He was real and raw and had me rooting for him throughout Convergence.

The biggest worry I had after finishing Convergence is that I feel like our society is going down the same path that leads us to the main issue (pre-this book). That scares the heck out of me.  Hicks was able to write a story that was set in the future, with future tech, cool stuff, and in a world that was almost destroyed and it was completely believable in my eyes.

Overall, it was an enjoyable book that I hope I get to listen to more of.  I also hope that Baldree signs on to do the rest of them – his narrator really brought this book home for me. It was a book that made me think and a book that when I was finished I almost started it over again because I know I missed some parts that would make the book even better (like you do when you finish a movie like Fight Club and you have to go back to see what you missed).

Memories are the most dangerous drug.

Jonah Everitt is a killer, an addict, and a memory thief. After being hired to kill a ranking officer of the Pacific Rim Coalition and download his memories, Everitt finds himself caught in the crosshairs of a terror cell, a rogue military squadron, and a Chinese gangster named Alice Xie. Xie is a profiteer of street drugs, primarily DRMR, a powerful narcotic made from the memories of the dead. With his daughter, Mesa, missing in post-war Los Angeles, Everitt is forced into an uneasy alliance with Alice to find her.

Mesa's abduction is wrapped up in the secrets of a brutal murder during the war's early days, a murder that Alice Xie wants revenged. In order to find her, Jonah will have to sift through the memories of dead men that could destroy what little he has left.

In a city where peace is tenuous and loyalties are ever shifting, the past and the present are about to converge.