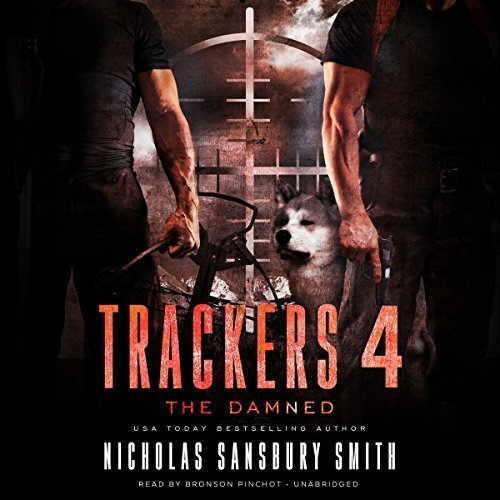 Some of Smith’s Best Work

Well then, that’s a series wrap.  And boy was it ever a great series.  Rarely does a book make me feel like “oh shit, that could very easily happen”. Trackers made me feel that way from beginning to end.  The fourth and final book definitely made me feel that way – especially once things between countries started to overboil and (trying not to spoil) they were given permission to take care of some of the heat.

The Damned was one of those books that I started but just could not put down.  Smith had me absolutely riveted to my seat and I could not wait to figure out where Raven and co were going to end up.  I couldn’t have predicted pretty much any outcome since he had me guessing throughout.

There were some characters that I liked in this book (and in the others) that didn’t make it.  That shouldn’t come as a surprise because apocalypses are messy – but it’s good to read a book where not everyone is safe and untouchable.

It’s also extremely refreshing to read a book (and series) where a non-white is the main character in it.  Raven is an absolutely badass MC and I would love to have him watch my back any day.  Watching his character transformation from book one to the finale of book four felt like watching a boy become a man – except on a grander scale.

It’s also refreshing to read a book where politics really isn’t forced on you – but Smith seemed to take what would most likely happen and applied it to the series.  I won’t dive into why I believe this and I’m sure there are some other reviews that show you different – but no matter how close the US would be to empty – someone would jump in to help – even those we least expected.

I ended up making this review an almost review of the entire series – but you made it this far – the book was awesome and so was the series.  It’s definitely up there with Hell Divers in my eyes as some of Smith’s best work.

There was a scene at/near the very end of this book that definitely started to tear me up.  I love spending that much time with a book that it actually chokes you up when something happens.

The deadly hunt ends in the fourth and final installment of the bestselling Trackers saga.The mountain town of Estes Park, Colorado, is scrambling to recover from the betrayal of two of their police officers, and prepare for threats outside their borders. But with Chief of Police Marcus Colton imprisoned by rival Sheriff Mike Thompson, the job to protect the isolated town is left to Sam "Raven" Spears and newly promoted Captain Lindsey Plymouth. They will do everything they can to bring Colton home and save their citizens, but one thing is certain: a war is coming to Estes Park, and no one will be spared from the horrors.Across the country, Secretary of Defense Charlize Montgomery continues to lead recovery efforts in the wake of the arriving Chinese workers and soldiers. But the threat of foreign soldiers on American soil isn't the only problem-the Sons of Liberty and other domestic terrorist groups continue to rise to power, enacting a wave of violence and chaos that threatens to derail the recovery efforts.Will Raven, Colton, and Charlize save the United States from collapse? One thing is certain-they won't be able to save everyone. Not with their humanity still intact.