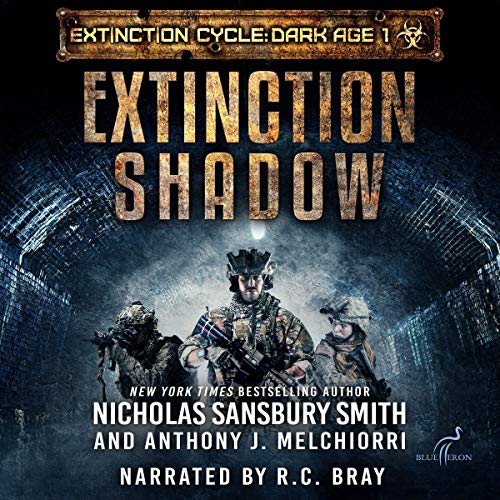 I love when you can’t tell that two authors worked together on a book.  Smith and Melchiorri’s stories blended perfectly in this and I wouldn’t have known which author wrote which part.

Thankfully the extreme descriptions of clicking (needed and necessary in the other books, just grosses me out to no end) are slightly less in this book – but it is replaced with fantastically thought out Variants that had me scratching my head trying to figure out what was going to happen throughout the book.

Extinction Shadow is one of those books you put on and the hours just fade away.  I was trying to get to 50% (from around 45 or so – and next thing I knew I was much further than 50%. I looked at the clock and it was almost 2am.  I couldn’t believe that the time got away from me, but the storytelling is so good that it just went by like nothing was happening.

The hardest (read hardest, not worst) part of Shadow was trying to remember that it wasn’t a Hell Divers book.  Smith decided to go with Bray instead of Pinchot for the narration and personally, I’m glad.  I don’t hate Pinchot’s narration, but Bray has a cult following that will definitely help with a book like this.  The only thing that made it harder where some of the characters had the same names as Hell Divers characters.  I want to say there was a Tim or Timmy in this, along with at least one other.  It was one of those “fun” challenges.  Like having so much money you don’t know what to spend it on.

Overall, a fantastic story that I flew through.  I really appreciate the introduction at the beginning of the book (easily skippable if you’ve read every book in the original series).  I’d only read about half of them, so I was familiar with some of the settings and definitely familiar with the Variants – but everything other than that was lost to me. Even if I’d read them all, I think I would have appreciate the quick reminder.

The top-rated hit series that sold a half-million copies returns in the next season of the Extinction Cycle. Welcome to the Dark Age!

Survivors thought the extinction cycle ended, but a powerful evil lurks in the shadows....

Eight years ago, an engineered virus ravaged the globe, infecting and transforming humans into apex predators called Variants. Billions died, civilization collapsed, and the human race teetered on the brink of extinction. Nations banded together and heroes rose up to fight these abominations. On the front lines, Captain Reed Beckham and Master Sergeant Joe "Fitz" Fitzpatrick of Delta Force Team Ghost fought against the Variant hordes. With the aid of CDC Doctor Kate Lovato, they helped lead humanity to victory.

Now, almost a decade after the end of the war, civilization has slowly clawed toward recovery. In the Allied States of America, survivors live in outposts where they have rebuilt industry, agriculture, and infrastructure. The remaining Variants are believed to be dying off under destroyed cities and the abandoned frontier.

But evil and intelligent forces dwell in the shadows with the starving beasts, scheming to restart the extinction cycle and end humanity forever. And once again, Beckham, Fitz, and Kate will rise to fight them, joining forces with new heroes to try and save what's left of the world.