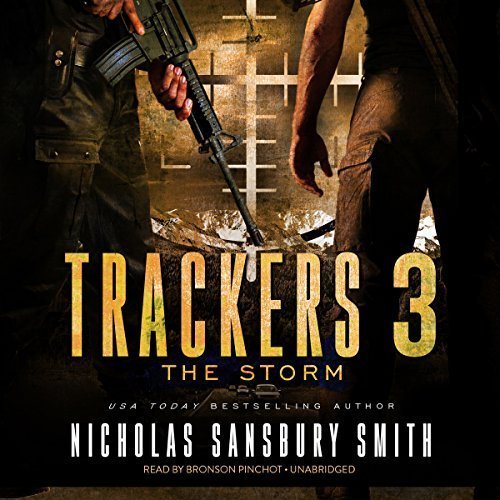 When reading a longer series like this – it’s easy to see “oh I still have 10 hours left” and hope that things are going to be packaged up nice and neat by the end of the book.  What you forget as a blogger is that these books came out after months if not years – making the reader “suffer” between them.  The Storm was the first book that ended that way in my eyes.  Now, I’m reading it almost two years after it was released and I will be starting book four any moment now, but it ended and I thought “holy crap, I need to know what happens next”.  That doesn’t happen to me all the time and when it does, it’s a sign of a great book and an even better series.

I can see now why this book and especially this series have an average of 4.5 stars on audible. It’s just an incredibly well written and immensely well thought out. Smith is able to write characters that I care about and bad guys that I hate.  He’s able to make me genuinely mad at him, and then redeem himself in a chapter (no spoiler, but good lord was I mad/sad for about 5 minutes).

You’d think that by book three I would see plot twists coming – but Smith got me again (even after earlier in the book giving the potential twist away).  He’s able to write books that absolutely stun me in the best way possible and The Storm was no different.

The Storm has some of the most harrowing moments in the series so far and we’re also starting to see the light at the end of the tunnel.  The US isn’t recovering yet, but we find out near the very end how things might finally pick up again.  Smith did his research and I think that the way he’s taking the book for his characters and for the overall arc was a brilliant decision and one that would really happen.

Overall, another home run for Smith and another well-narrated Pinchot book! I can’t say much more about it since I’ll spoil all the things!

A deadly storm of violence sweeps across the United States in the thrilling third installment of the best-selling Trackers saga.

One month after the North Korean attack, the United States continues to fall into anarchy. In Estes Park, Colorado, Police Chief Marcus Colton and tracker Sam "Raven" Spears work tirelessly to defend their hometown. But after a brutal coordinated attack, they realize it will take much more than roadblocks and a volunteer militia to protect their borders and keep their families safe.

Defense Secretary Charlize Montgomery has been reunited with her son, but his homecoming is short-lived due to the state of the FEMA survival centers around the country. She heads to the one in Charlotte, North Carolina, with her loyal bodyguard, Albert Randall. Outside the camp's walls, the city has descended into chaos, and desperate civilians will do anything to get inside. When Albert stays behind to rescue his sister, he is caught in the middle of a turf war between rival gangs.

In this lawless new world where the most ruthless thrive while innocents suffer, Colton, Raven, and Charlize are faced with their toughest challenges yet. One thing is certain - they won't be able to save everyone. Not with their humanity still intact.