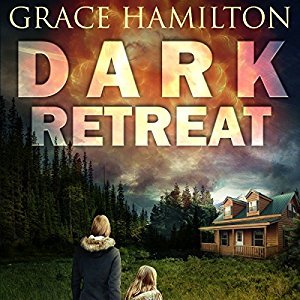 The story follows a mom and her daughter in the days and weeks following a devastating CME. They are forced to make hard decisions and the daughter is even in great danger as she is seemingly getting sicker and sicker.

The story itself (outside of what I write to finish this review) was an enjoyable one and one that not a lot of authors write.  Most of the time they write about escaping to a comfortable place with love and family — not the struggles of a single mom and a sick daughter (I’m not giving away too much here).  I like that the story revolved around Megan and her daughter Caitlin.

There was some atypical (or typical depending on the stories that you normally read) romance involved in the book that, in the beginning, felt out of place, but as the book continued, felt a little more in place.  Sometimes I think that the romance is “too easy” in situations like this, but then again I’ve never been thrown into a situation like this, so who knows.

Megan as a character was pretty likable.  She has some character flaws that made her believable, but there were some of them that felt like Hamilton was trying to make sure that we as readers understood.  While there’s nothing wrong with pushing a point — some of them felt a little overdone.

The story had a nice arc though and I felt like I was getting an enjoyable (and slightly different) story out of the book.  It’s one thing to have strong female characters written in novels, it’s made even better that she wasn’t totally helpless. Sure Megan had to learn other survival techniques, but she was better off than most people (men included) would be in this sort of situation.   Things felt a little too easy for them and the story kept going back towards being an almost post-apocalyptic romance tale.

Honestly, I don’t always write about the bad in a book because I am really good at putting on what I call my “movie goggles” and letting a story take me away.  There was a part in the intro of this story (and in the series title) where it talks about an EMP. But when Hamilton writes what happened it sounds like it was really a CME (Coronal Mass Ejection) caused by the sun.  These two things are not the same and should not be written as the same.  I can understand having both of some sorts (a CME by the sun and an EMP by a country we are at war with).  But calling a CME an EMP really brought me out of this book. BUT if you can look past that (which I did) this book is full of the typical post-apocalyptic fillings that will make most PA fans happy.

This is my first Andrew Tell book in a while and I’m really glad he narrated it.  He has such an easy to listen to voice that makes any story flow.

Three months after life as she knows it was decimated, Megan Wolford has only one goal: protect her daughter, Caitlin, at any cost. When a mysterious illness strikes Caitlin down, Megan is forced to forage for medical supplies at a remote lodge. The last thing she wants is help from her fellow survivors when so many in her life have let her down—but soon she'll find herself with no other option.

Ex-Navy SEAL Wyatt Morris is doing everything he can to hold his family together after the tragic death of his prepper Dad, so when Megan enters their lands, he is mistrustful at first despite feeling drawn to her. He won't turn away an ill child though--no matter how deadly the world has become. But the arrival of another stranger named Kyle soon gives them all a new reason to be suspicious. Wyatt knows he’ll have to forge alliances in order to keep his family safe, but trusting the wrong person could be a deadly mistake.

When Megan and Wyatt discover her daughter’s illness may be linked to Kyle’s arrival, it sets off a race to discover the truth before it’s too late to save Caitlin—and the rest of the Morris clan. Can they work together for survival . . . and something more?

Grace Hamilton is the prepper pen-name for a bad-ass, survivalist momma-bear of four kids, and wife to a wonderful husband. After being stuck in a mountain cabin for six days following a flash flood, she decided she never wanted to feel so powerless or have to send her kids to bed hungry again. Now she lives the prepper lifestyle and knows that if SHTF or TEOTWAWKI happens, she’ll be ready to help protect and provide for her family.

Combine this survivalist mentality with a vivid imagination (as well as a slightly unhealthy day dreaming habit) and you get a prepper fiction author. Grace spends her days thinking about the worst possible survival situations that a person could be thrown into, then throwing her characters into these nightmares while trying to figure out “What SHOULD you do in this situation?”

It’s her wish that through her characters, you will get to experience what life will be like and essentially learn from their mistakes and experiences so that you too can survive!