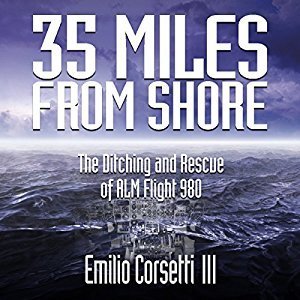 I like to learn so I enjoy picking up nonfiction audiobooks from time to time.  35 Miles From Shore tells the true story of the “ditching and rescue of ALM Flight 980” along with the company and the pilots’ backstory leading up to that fateful day.

My best friend is really into planes — pretty much any kind of plane you can think of he likes from little prop planes to big fighter jets.  So I picked this book up because I wanted to chat with him about it and maybe even recommend him a new book to listen to.  I was right because 35 Miles From Shore was a really interesting, well researched, and incredibly told story.

You can tell that Emilio Corsetti III is a pilot too since there are details in this book that no normal human would know or understand.  Thankfully Corsetti was able to write these things out in a way that a normal non-aviation person could understand.

Sure, if you’re not into planes (or scared of plane crashes) I would probably avoid this book.  And obviously, if you’re not a non-fiction fan maybe steer clear.  But, for a non-fiction book, there were parts of it that Corsetti was able to write like he was writing a fictional tale.  Combine that with the overwhelming amount of knowledge that this book has — any aviation or airplane crash fans will find a gem in this story.

Corsetti weaves a tale full of detail, descriptions, and woe in the telling of the crash of ALM Flight 980.

The narration of 35 Miles From Shore was done by Fred Filbrich who I thought did a really nice job.  He was able to walk me through a story with lots of detail and made it easy to listen to.

On May 2, 1970, a DC-9 jet with 57 passengers and a crew of six departed New York's JFK International Airport en route to the tropical island of St. Maarten. The flight ended four hours and thirty-four minutes later in the shark-infested waters of the Caribbean. It was, and remains, the only open-water ditching of a commercial jet. The subsequent rescue of survivors took nearly three hours and involved the coast guard, navy, and marines. This gripping account of that fateful day recounts what was happening inside the cabin, the cockpit, and the helicopters as the crews struggled against the weather and dwindling daylight to rescue the survivors who have only their life vests and a lone escape chute to keep them afloat. 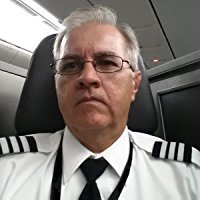 Emilio Corsetti III is a professional pilot and author. His work has appeared in both regional and national publications including the Chicago Tribune, Multimedia Producer, and Professional Pilot magazine. Emilio is a graduate of St. Louis University. The book 35 Miles From Shore: The Ditching and Rescue of ALM Flight 980 tells the true story of a 1970 airline ditching in the Caribbean Sea and the efforts to rescue those who survived. Emilio’s upcoming book Scapegoat: A Flight Crew’s Journey from Heroes to Villains to Redemption tells the true story of an airline crew that was wrongfully blamed for causing a near fatal accident and one pilot’s decades-long battle to clear his name.