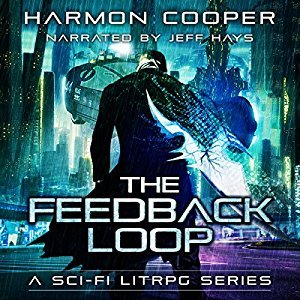 A really great start to the series

Disclaimer: this was my first LitRPG but I love playing video games and I especially enjoy a well thought out RPG or MMORPG.  With that being said I really enjoyed the heck out of it.  Cooper was able to build a world that was completely believable and incredibly detailed.

Quantum lives in a world that is the same day in and day out.  He lives in a digital Groundhog’s Day where every day the same thing happens to him and around him.  The monologues around this were both funny and sad (sad because I cannot imagine reliving the same exact thing every day). Except for one day, things start to change.  His 8:05 isn’t the same anymore.  The NPCs (non-player characters) are starting to act weird.

The Feedback Loop was a really enjoyable Sci-Fi LitRPG.  Cooper was able to combine elements from a lot of my favorite parts and subgenres and make them into one well thought out and a deeply interesting world. Quantum as a character was perfect for this.  A little more than a little cynical with an incredibly dry (and a little sadistic) sense of humor – he was fun to follow around this generated world.  He reminded me a little bit of Tex Murphy (this would be an old callback if they didn’t make a newer version recently).  I mean that he had this self-hating noir-detective intermixed with a cyberpunk type musing. Also, Quantum memorized his item list was a nice touch.  I know that playing games like this you always remember what number or slot your favorite weapons are in, so I thought this was a really nice touch.

The story itself was also pretty awesome.  It had a The Matrix feel to it, and I won’t explain why because I think it’ll give too much of the story away.  The other protagonist and seemingly first and only human character he’s dealt with in many years were also well written.  She was tired of his crap within the first few minutes of meeting him and seemingly tried to help him change his ways.

Overall, The Feedback Loop was a great intro to the LitRPG world for me and I hope for you if you decide to pick this book up. Cooper created a wonderfully detailed world that will be memorable for me long after finishing this book.

Add in the narration by Jeff Hays, which felt like it could have been a full-cast recording, and you have a total hit.  I know that I’m a little late to the party in reading and reviewing this book – but don’t be any later, grab this book now and see what you’re missing.

Quantum Hughes is the type of guy who doesn't back down from a fight.

Trapped in a virtual world with a limitless inventory list, Quantum lives his days on repeat, fighting the same killer NPCs and hashing out the same dark and gritty story lines again and again.

But everything isn’t fun and games for Quantum Hughes.

He receives a message from an actual human player, his first message from a real person in years, which sparks an epic adventure across multiple online fantasy worlds. Suddenly Quantum is being hunted by a murder guild known as the Reapers; suddenly he’s no longer the toughest guy on the block; suddenly, his real world body is no longer safe.

LitRPG action, humorous cyberpunk musings, and fantasy settings combine in this ground-breaking sci-fi series. Get started on the best-selling Feedback Loop series today and join in the adventure!

Originally from Austin, Texas, I spent five years in Asia honing my writing skills, adventuring, and studying languages. I now live in America with my wife, where I am an independent author of science fiction and fantasy books with twenty books under my belt.

All of my series are connected in some way, through characters or through a shared world and an online world known as the Proxima Galaxy.

A quick breakdown of their connections based on the years they take place:
Year 2058 — The Feedback Loop series
Year 2075 — Fantasy Online series
Year 2083 — Life is a Beautiful Thing series

(More to come this summer!)

Fantasy Online Hyperborea — A LitRPG with a real world setting of Tokyo, Japan. Fantasy Online is my most popular series yet featuring a colorful cast of characters, powerful world-building, and JRPG-inspired game mechanics.

The Feedback Loop — A gritty noir LitRPG that quickly morphs into an epic fantasy adventure that spans several worlds and is chocked full of cyberpunk humor. Book Seven is out now!

I’ve published other works in other genres, most notably Dear NSA, The Zero Patient Trilogy, and Boy versus Self. Catch them all!

One thought on “Audiobook: The Feedback Loop by Harmon Cooper (Narrated by Jeff Hays)”