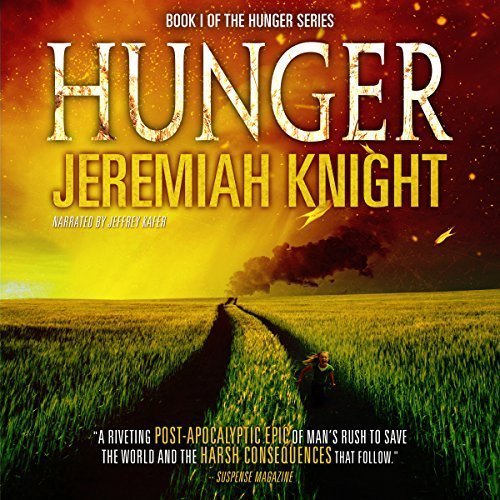 You are what you eat

World hunger is over, plants grow anywhere there is open ground (not just soil, but sand and other porous surfaces).  This sounds like a total dream, right?  Well, this dream may come with some consequences.  Maybe it’s not a dream at all.  It’s actually a nightmare when issues start to arise with anyone who has ever eaten food with this new gene/strain of GMO in it.  A post-apocalyptic tale that will make you question what you had for dinner tonight and where it came from.

The narration done by Jeffrey Kafer is incredibly professional.  Really high quality with no issues or faults.  The pacing is really well done while still being completely understandable.  He is another narrator that I am going to add my (quickly growing) list of narrators that add to a story instead of taking away from it.

This book had an air of familiarity to it.  Partially because it was a similar (but at the same time totally different) story as Lisa von Biela’s novel Broken Chain.  With that said, this novel is unique.  Part of the familiarity I was feeling was the author himself.  I didn’t know that Jeremiah Knight was a pseudonym for one of my favorite “monster” authors, Jeremy Robinson.

With that being said, there are some similarities between JR and JK (use of monsters), but there are some differences too.  This world was really well hashed out.  The world felt hopeless (hence the post-apocalyptic genre).  The characters felt like they were going to die at any moment from any combination of fates.

The book really scared me, because the basic “we solved world hunger” bit of this book felt so good, but once you realize what happens (you find out VERY quickly) your hopes are dashed and your good feelings go, hide, and won’t come back.

The book finishes on a somber note, but not a sad one.  The epilogue adds some nice intro into the next book (that’s about all I can say without giving anything away).

Now all I need to know is when the next one is coming out because I am eagerly awaiting its arrival.  Now if I can survive the wave after wave of monsters coming after me until that happens… we’ll see!

Desperate to solve a global food shortage, ExoGen scientist Dr. Ella Masse oversees the creation and release of RC-714, a gene that unlocks millions of years of adaptation and evolution, allowing crops to use long dormant junk DNA to rapidly adapt to any environment. The world’s food supply grows aggressively, occupying every inch of earth, no matter how inhospitable. World hunger is averted. Humanity flourishes. RC-714 is digested, absorbed and passed on.

The Change affects small, fast breeding mammals first. They multiply with the same aggressive speed as the ExoGen plants, but a new, insatiable hunger drives them to violence. War between species breaks out. And then RC-714 reaches humanity, along with every other large creature on the planet. Civilization implodes, as every living thing that consumed the ExoGen crops begins to adapt to a world full of predators, accessing genes dating back to the beginning of life itself.

Peter Crane and his son Jakob survive the Change, living in their family farmhouse and eating non-ExoGen food from a biodome, one of many provided by Ella Masse, who discovered the ramifications of her breakthrough too late. The pair ekes out a living in a world full of monsters, surviving until Ella shows up on their doorstep with her daughter, pursued by desperate predators and men alike.

As the farmhouse falls under attack, Crane learns that the end of humanity, of life on Earth, can still be averted: if Ella Crane and her daughter survive, and if they make it to the other side of the country without being captured…or consumed.

One thought on “Hunger by Jeremiah Knight (Narrated by Jeffrey Kafer)”