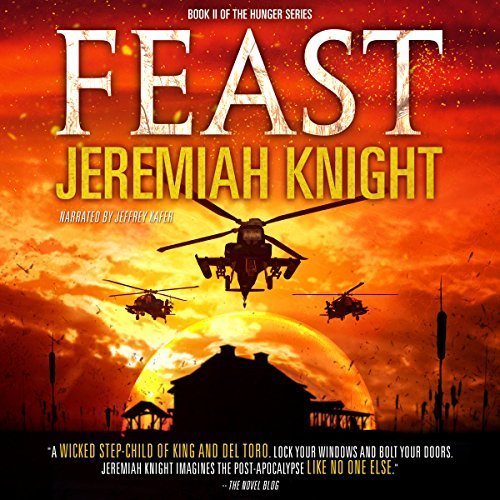 If you thought Hunger was good…

Feast really delivers from all aspects.  I really enjoyed Hunger, and I wasn’t sure how good Feast was going to be.  I was pleasantly surprised that it was better than I was expecting, and might even be better than the first book.

The narration for Feast was done by Jeffrey Kafer who is a master of his craft.  His voice provides the perfect soundtrack for this novel.  Making sure that the pace and everything matched perfectly with the book.

The continued story follows the same group of people that it followed in the first (I won’t ruin it by telling you exactly who) on their journey towards Boston.   The story itself was fast-paced and felt like it was over before I blinked.

It was really enjoyable, a mixture of “what the?” and “well, that was awesome!” which is pretty awesome for any book to do.  Jeremiah Knight aka Jeremy Robinson definitely knows how to write about monsters.  Every book I read of his always finds a way to surprise me.  Even when I know that a monster (or in this case a highly evolved animal) is coming it still surprises me the way that he can explain them with ease and terror.

Overall, Feast was a great second book to the series.  Expect a third book, because the story is definitely not done.

The human race hangs by a thread the thickness of a single gene: RC-714. The gene, which unlocks the millennia of genetic traits stored in junk DNA, gives crops the ability to rapidly evolve and thrive in any environment. But RC-714 is passed on when consumed. Any creature—mammal, reptile, fish or insect—that eats the genetically modified crops becomes a slave to the Change. Bodies morph into unrecognizable abominations. Intellect takes a back seat to ravenous hunger. And all the world’s species eat each other toward extinction.

Racing against this impending outcome, Peter Crane and his family attempt to reach a laboratory in Boston, where a slim hope of saving the human race from extinction exists. But before heading northeast, they must visit the swamps of South Carolina’s Hellhole Bay to find a scientist who can help undo the damage done by ExoGen, the corporation that created and unleashed RC-714. Upon reaching Hellhole, the family is captured by a man named Mason, who not only survived the Change, but managed to keep a small community alive as well—a community that is subject to his every carnal desire and whim.

Trapped in the clutches of a man whose heart is as twisted as the monsters that roam the Earth, Peter, Ella, Jakob, Anne and Alia, must fight for their freedom from a literal hellhole. Danger lurks behind every door, stalks beneath the swampy waters and descends from the sky. As enemies—both human and ExoGenetic—close in, surviving will be harder than ever, and for some, impossible.

In 2015, Jeremiah Knight exploded onto the horror/sci-fi scene with his Top 100 bestselling novel: Hunger. Combining the speculative science of Crichton with the twisted scares of King, Feast continues the story that made Hunger the #1 post-apocalyptic novel.

Also by this author: Hunger
Also in this series: Hunger