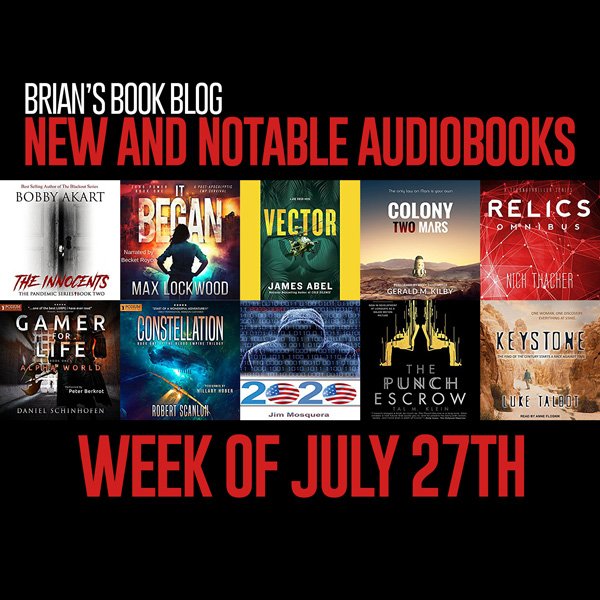 Here are the books that were released the week of July 27th that I think are new and notable including books from Bobby Akart, James Abel, and Nick Thacker. Featuring Narrations by Becket Royce, Hillary Huber, and Peter Berkrot. 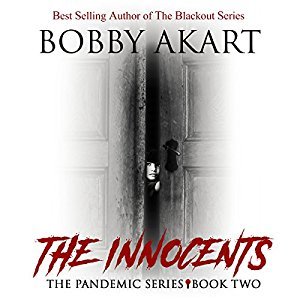 And so it begins, the disease enters on the quiet feet of The Innocents.
It invades each and every one of us.
But, they say, plagues are like fires.
At some point, they burn themselves out. Or not.

FEAR AND RUMOR CAN BE FAR MORE DANGEROUS THAN THE VIRUS ITSELF. 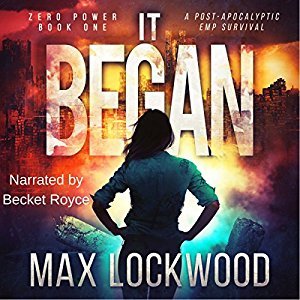 The EMP strike was just the beginning of it all…

Clara Thomas was a 9th grade English teacher, living a simple life at home with her sister and grandmother. She always had plans to settle down some day and become a writer. Sometimes, plans are just dreams left unfulfilled.

They thought that the widespread outage was just within their vicinity. They were wrong.

Without any electricity and power, Clara needs to help her family survive. The people in society have become restless, and will do anything for food. With the fall of power, law and order have become nonexistent, letting people get away with crimes.

Will Clara be able to be strong for her family and those around her to get them through this crisis? Will she be able to get herself through it? 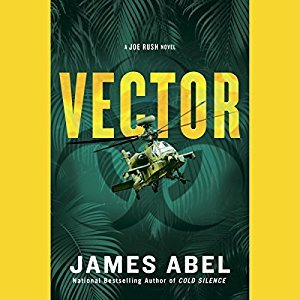 Joe Rush takes on a new terror, spawned in the Amazon rain forest, that threatens to bring the world to its knees in James Abel’s latest bio-thriller, now in paperback.

While studying new forms of malaria at an Amazon gold rush, Joe Rush’s best friend and partner, Eddie Nakamura, disappears. Learning that many of the sick miners have also vanished, Rush begins a search for Eddie that takes him into the heart of darkness–where while battling for his life, he discovers a secret that may change the world.

Thousands of miles away, sick people are starting to flood into U.S. hospitals. When the White House admits that it has received terrorist threats, cities across the Northeast begin to shut down. Rush and his team must journey from one of the most remote spots on Earth to one of the busiest, as the clock ticks toward a kind of annihilation not thought possible. They have even less time than they think to solve the mystery, for the danger–as bad as it is–is about to get even worse. 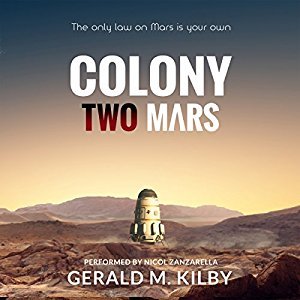 The only survivor of the ill-fated ISA mission is now stranded on Mars. Having been designated a bio-hazard by Earth, any hope of returning home is all but gone. She is alone, isolated, and abandoned.

That is, until another human shows up in the main colony airlock. However, he’s barely alive and soon dies without regaining consciousness. More disturbing though, a DNA test identifies him as a colonist who has already died, several years earlier — impossible as that may be.

Nevertheless, there is only one place he could have come from, the mine on the far side of the Jezero crater — Colony Two. An outpost they had presumed was long dead. But if he survived, maybe there are others still alive?

She now has no choice but to attempt the dangerous journey across the crater to investigate. Because if she doesn’t find some answers soon, her only future is to die alone on Mars. 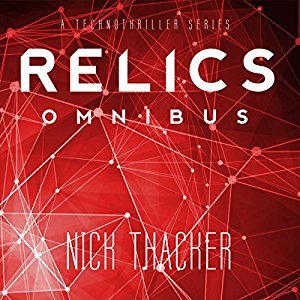 Relics: Omnibus is the complete technological post-apocalyptic series.
You’ve read the books separately, now read them together. The Relics: Omnibus edition is the beautiful, reformatted three-in-one edition you’ve been waiting for.
Relics: One This is Relics.

Myers is a Relic. Cast out of society by a computer program that’s far more efficient at managing and regulating human life than any human ever could be.

The System is running everyone’s life. It’s quickly becoming smarter than humans, and it no longer has any need for leaders like Myers. There’s a technological singularity coming, and only Myers knows how to stop it.

The problem? He doesn’t remember anything from the past fifteen years.

And now he’s being hunted…

Relics: Two Myers is starting to piece together his life as the world around him crumbles. After a technological singularity, there is an all-knowing power controlling the lives of everyone on Earth. Myers can’t remember what the System is, but he does remember one thing: he played a role in why it exists.

Rand and Diane join Myers in a race to discover what the System wants, who wants to stop it, and who wants to see it succeed at all costs. However, there are new players in the game. An entire population of Relics exists, but what they want with Myers is still unclear.

What’s worse, they’ve all lost their minds, and Myers is starting to feel his own slipping away…

But there will still be an end.

There are others – Unders, Relics, and other rebels who want nothing more than to bring the System to its knees, as impossible as that may seem. This is the end.

Join Myers Asher, Jonathan Rand, Ravi and Ary, and others as they race to beat the assembling army of System-controlled humans to the ICPL. It is believed to be impossible, yet impossible things are usually worth dying for.

“Relics is another gripping technothriller full of suspense and action from Nick Thacker, the author that brought you The Enigma Strain, the best-selling action/adventure and conspiracy thriller!” 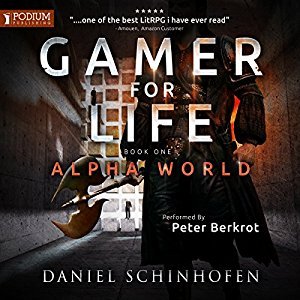 Seamus is facing life in prison without parole. While doing his time he’s given an option by the Department of Justice and the biggest virtual game maker around, Mindblown Entertainment. If he will help them test long term immersion he will get the chance to play the latest game from Mindblown, Alpha World. All he has to do is sign away his legal rights and sign an NDA.

Now exploring Alpha World, Seamus becomes the Summoner Alburet. Follow Alburet on his journey of exploration and questing in the latest game to hit the market. He will summon demons, befriend players and NPCs alike all while trying to find a little happiness in his life.

He’s the first gamer to be sentenced to life imprisonment in a virtual world. What could go wrong?

(This book contains some adult themes, this was suggested by a few readers and I listen to those who have enjoyed my work.) 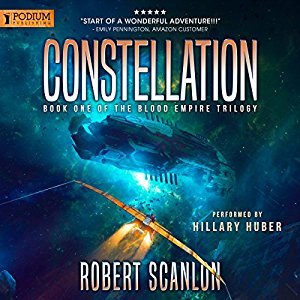 “This series fills the Firefly-shaped hole in my heart!”
One snarky heroine and her band of misfits up against, well, pretty well everyone else.
Indy Jackson is a stubborn space pirate with two goals in life: keep her father’s underground operation alive and hunt down his murderer.

When Indy is framed for an alien massacre, she is forced to go on the run to clear her name and attempt something dozens of professionals before her have failed to achieve: find Constellation, the Sector’s fabled battlecruiser.

Missing in action, and believed to be destroyed in the last Great War, Constellation is the only warship capable of defending the Sector against its mightiest enemy, the Blood Empire.

But the Sector is crumbling and on the brink of civil war. If Indy sides with the wrong faction, then no one will survive the Blood Empire’s onslaught. Especially not Indy, her brother, and her ragtag crew.

Will Indy make the right choice, and successfully play the Sector’s fragile politics … or will the Galaxy fall into disarray, bringing death and destruction to all?

Constellation is the first book in a fast-paced space opera saga. If you like intense stand-offs, unexpected twists, and planet-loads of hidden agendas, then you’ll love Robert Scanlon’s Blood Empire series. 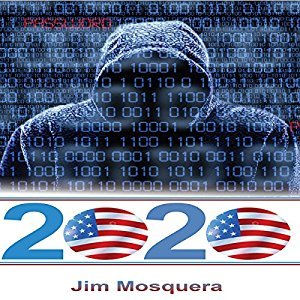 2020: Chandler Scott, Book 1 by Jim Mosquera
Narrated by the Author

Chandler Scott, a rising TV journalist, tries to connect the dots in a country mired in another financial crisis. Cyber terrorists add to the flames of fear. The public yearns for help from its leaders who respond in ways previously unimagined. Politics and economics collide during the Presidential election of 2020.

Chandler uncovers a dark, far-reaching conspiracy that plants the seeds for the next crisis, a crisis that will shape the future of the United States of America and the world.

2020 is a fusion of historical events with a near-term look at the future. The chilling thriller is so convincing in its accuracy that readers will wonder when the events will transpire. 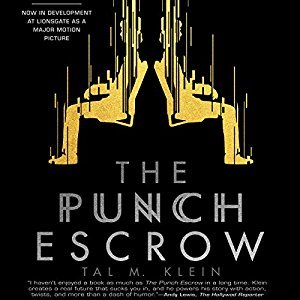 It’s the year 2147. Advancements in nanotechnology have enabled us to control aging. We’ve genetically engineered mosquitoes to feast on carbon fumes instead of blood, ending air pollution. And teleportation has become the ideal mode of transportation, offered exclusively by International Transport—a secretive firm headquartered in New York City. Their slogan: Departure… Arrival… Delight!

Joel Byram, our smartass protagonist, is an everyday twenty-fifth century guy. He spends his days training artificial-intelligence engines to act more human, jamming out to 1980’s new wave—an extremely obscure genre, and trying to salvage his deteriorating marriage. Joel is pretty much an everyday guy with everyday problems—until he’s accidentally duplicated while teleporting.

Now Joel must outsmart the shadowy organization that controls teleportation, outrun the religious sect out to destroy it, and find a way to get back to the woman he loves in a world that now has two of him. 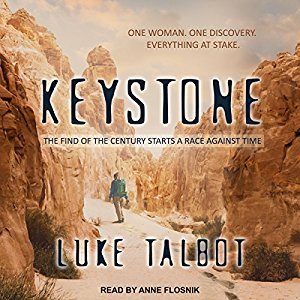 Something is hidden beneath the shifting sands of Middle Egypt, and its discovery will bring humanity to the edge of oblivion.

Archaeologist Gail Turner stumbles upon the most incredible find in living memory, a find that the ruthless Seth Mallus will do anything to get hold of. Caught up in a web of deceit, kidnapping and murder, Gail struggles to unravel the mystery of the Amarna Stickman as the world around her descends into chaos.

With startling data from NASA raising more questions than answers, she is ultimately faced with a revelation that shatters everything she thinks she knows, and who she is.