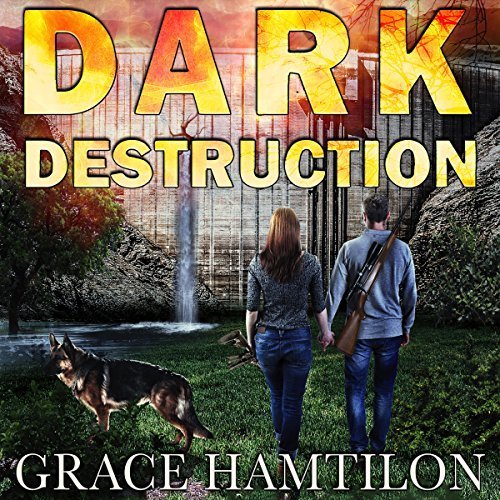 Up Against Seemingly Insurmountable Odds

Sometimes a book cover is what drives me to read a book.  For some reason I didn’t look at this cover until I was more than halfway through Dark Destruction (probably because I already like this series and I knew I wanted to read this without seeing the cover) but the cover on this one really gives a nice glimpse into what the Lodge is going to deal with in book four of the EMP Lodge series.

Megan, Wyatt, and the gang are back at it again. Having survived an attack by crazy bikers and finally settling in (as much as you can) to the Lodge – they hear an explosion and decide to check it out.  Upon finding the place where they think the explosion took place they find a crack in the dam protecting their Lodge from being washed away.

Dark Destruction is an aptly named book in the EMP Lodge series.  I really wasn’t sure if everyone was going to make it out of this one alive – and I won’t ruin it for anyone.  I thought that Megan’s idea was a little crazy but that’s what it takes to stay alive.

I also like that the survivors haven’t been out on their own long enough that they haven’t lost all hope.  Some prepper/post-apocalyptic books are written in a way where you just know that day 2 the person or people have given up hope of there being any good left in the world.  Hamilton has been keeping a little sliver of hope alive in Megan and I can’t tell if it’s going to continue or finally be squashed.

Andrew Tell is a magician for this series.  He takes an already good book and – poof –  adds a little bit of his magic to it and it’s even better.  I think that his narration in combination with Hamilton’s writing style will have me coming back for more.

In this new dark world, responsibility for others is a heavy burden.

Megan Wolford is used to handling her own problems, so being part of a makeshift family, and all the responsibilities that come with it, is a new experience. She'll do anything to help protect her newfound love Wyatt and the lodge group - but sometimes events are out of her control....

When a leak in a nearby dam threatens to flood the land they've fought so hard to keep, Megan and her group will have to make a difficult choice: stay or leave? Stopping the flood will require all their resourcefulness, prepper ingenuity, and effort - but leaving it will mean the blood lost protecting it was for nothing.

As Wyatt reveals the true hidden value of the lodge, they'll be forced to dig in and build a set of flood defenses to divert the incoming torrent. But with the leak growing larger every day, the survival of the group is anything but guaranteed - and little do they know, a force more malevolent than Mother Nature is behind the deteriorating dam....