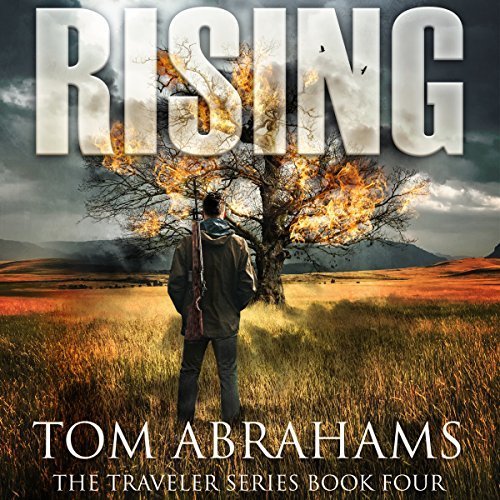 A Dark and Gloomy Revenge Story

In Rising, Battle is back but he finds himself a new companion.  After being left for dead — he vows to get revenge on the three men who left him for dead.  The wake that Battle leaves is unbelievable.

Rising showed a completely different Battle.  Honestly, it was a Battle I didn’t enjoy as much.  It definitely had a “Taken” feel to it where he would do absolutely anything to get revenge.  I think the addition of Lou really helped make this story for me.  She was a little firepot and the conversations between Battle and her were sometimes outright hilarious.

Because this book was so dark, the comedic breaks were really needed.  One of the reoccurring ones was calling the people who he was after Storm Troopers and saying “If these people could shoot, I’d be dead three times over” were easily two of the funniest moments in Rising.  Another was the continuous comparison to the Wizard of Oz.  It added those little “smile” moments in an otherwise dark and gloomy tale.

The whole “revenge” plot in this didn’t do it for me.  It wasn’t that it felt forced, but it really felt out of character for Battle — even after what happened at the start of this story.  I know that readers (me included) wanted more stories but changing the way a character acts after three books is a hard 90-degree turn to take.

Overall, my least favorite book in the Traveler series, but I didn’t hate it.  The moments of laughter and conversation between Battle and Lou saved this one for me.  And the fact that Kevin Pierce narrated it! I’m really intrigued to see what happens to Battle (and maybe Lou) in book 5.  I hope that the story is a little less revenge next time.

He survived The Scourge, defeated The Cartel, and escaped The Dwellers. Now he wants revenge. After a brutal attack on his homestead, Marcus Battle seeks to find the men who took away his second chance at life in a post-apocalyptic world. When he finds them, they'll wish they'd left him alone.