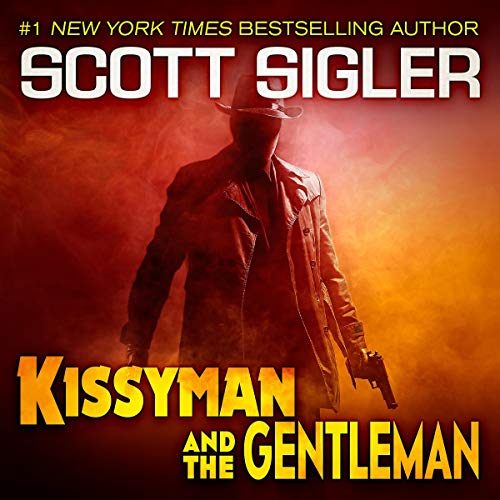 To go ahead and get the elephant in the room recognized I will announce here at the beginning that I am a rabid fan of Scott Sigler AND Ray Porter. I tell you this so that you understand the nature of this review: It will be biased.

Kissyman & The Gentleman is a new novella from Sigler starring an enigmatic character who at first glance is not someone you would typically equate as the protagonist. First appearing in the anthology Hardboiled Horror, Kissyman is an ex-Nazi hitman who certainly fits the description of “anti-hero”. A character who saw the horrors his country perpetrated while he was in uniform, decided to escape and ended up in NYC.

The story takes place in the years just after WWII where tensions run high between cultures in the city and a German former-Nazi is often not welcome. He takes the cases that most don’t while maintaining a reputation for always accomplishing his mission. Often times at no matter the cost. His name comes from two key pieces of his personality that set him firmly in the range of someone you’d be happy to have on your side but creeps you out entirely. First, he finds abject violence towards a person hysterical. He can’t help but giggle at the sight of shooting, stabbing, or some other form of physical violence. Second, and here is where the name comes in, he has a compulsion to kiss those who he has killed.

In this story, Kissyman is hired by another character named, the Gentleman, who is a polished opposite to everything that is Kissyman. He is blonde, attractive, charismatic, and suave. How he comes to hire Kissyman is his client is a popular Hollywood starlet who is receiving death threats from a fan. Kissyman is to discreetly take care of the problem so that the Gentleman can stay by the starlet’s side. With the help of a hired henchman, Lefty, who got his name due to losing his right arm in the war, the two set out to uncover this stalker.

As in most cases, this turns out to be something far more disturbing, dangerous, and wide-spread than Kissyman was led to believe. He and Lefty uncover a plot about Satanists, disguises, crime bosses, and so much more. Along the way, he meets a veterinarian who patches him up and introduces him to Hank Williams, a rottweiler in search of a home.

This story does not give anything away until the conclusion and is full of great characters, situations, and performances that make you sad it is only a few hours long. Ray Porter continues to give life to his narrations and makes you feel every bit as involved in the story. His smooth voice, deft timing, and character inflections show that he is surely one of the top narrators in the industry.

New York City, 1946. No one knows his real name, but when the job is too dirty, too dangerous, they call Kissyman.

Once an elite Nazi SS commando, an honorable soldier, a taker of lives. When he was assigned to Dachau and saw what he was actually fighting for, he went AWOL and ran as far away as he could - to America. He still makes his living with a gun, but he no longer kills for his country. Now, he kills for cash.

A dashing, high-profile bodyguard known as “The Gentleman” is hired to protect Beth Copenhaver, an up-and-coming Hollywood starlet. When a man named Mathis Wrenn surfaces from Beth's past and threatens her life, the Gentleman hires Kissyman to make Mr. Wrenn see the error of his ways.

It should be a simple job, but there is far more to the connection between Wrenn and Beth than the bombshell lets on. She's starring in a new movie with John Wayne called Western Dawn. As the premier approaches, Kissyman has to get to Wrenn before Wrenn can get to Beth.

Kissyman & the Gentleman is two-fisted, nonstop noir action that draws you deep into the murderous world of this most unlikely hero.

Also by this author: Earthcore

Audiobook: The Speed of Sound by Eric Be