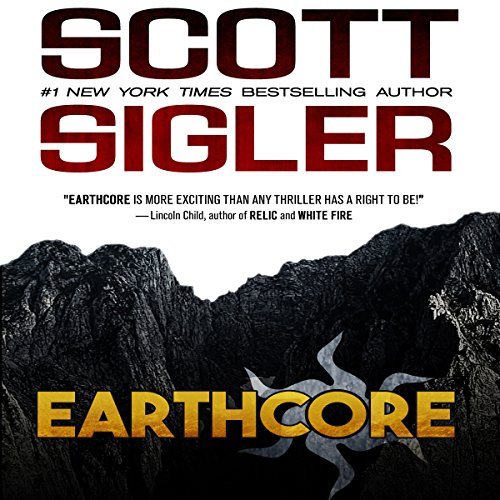 Ever since I read Infected a few years ago, I’ve done what I can to stay on top of his work and have yet to be disappointed. I say this to let you know that this review will be a little bias from the get-go. So, here we go:

This novel started life as a series released in episodes and quickly picked up a loyal fan base. The episodic nature of it is still prevalent in the story where natural breaks are a welcome respite to the constant action and energy of the story.

Earthcore is the story of a one prospector’s unlikely find of liquid platinum in a remote and hostile section of Utah. When he lets a mining corporation know of his claim it begins a huge mining operation in the area which is this company’s last hope to stay alive. In the process, they uncover something in the deep that did not want to be disturbed. Something that is fast, deadly, and many.

In this epic audiobook (over 20 hours), we are following a cast of characters who feel real and tangible. They’re characteristics and mannerisms are as apparent as their humanity. They have depth and souls, and it makes their ordeal all the more maddening as the reader. From one dangerous situation to the next we are following this cast of characters as they face this dangerous multitude in the deep, only to find that that is only part of the danger and even less of the mystery. With each turn in their subterranean trek, a new question is raised long before an answer to the last comes about.

Scott has created a story too big that it could potentially have several spin-off stories come from it and still wouldn’t make a dent in this world he built. It is masterful storytelling in the fun, addictive, and completely outstanding vein of every great action-adventure story. Thankfully, he let me know at a con appearance recently that he is nearly finished with the sequel to this titled, Mount Fitzroy. I can assure you I am on pins and needles for this to come into the world.

Additionally, if I could have been tasked with finding the perfect narrator for this story, my very first pick would have been Ray Porter. His narrations are a staple of my library and he has earned every award he has received. His rich tone and encapsulation of the characterizations of each person deliver a reading that is smooth and effortless to the listener. The 20-hour listening time felt like no time at all with him at the helm.

Deep below a desolate Utah mountain lies the largest platinum deposit ever discovered. A billion-dollar find, it waits for any company that can drill a world's record, three-mile-deep mine shaft. EarthCore is the company with the technology, the resources, and the guts to go after the mother lode. Young executive Connell Kirkland is the company's driving force, pushing himself and those around him to uncover the massive treasure. But at three miles below the surface, where the rocks are so hot they burn bare skin, something has been waiting for centuries. Waiting...and guarding. Kirkland and EarthCore are about to find out first-hand why this treasure has never been unearthed.

Also by this author: Kissyman & the Gentleman