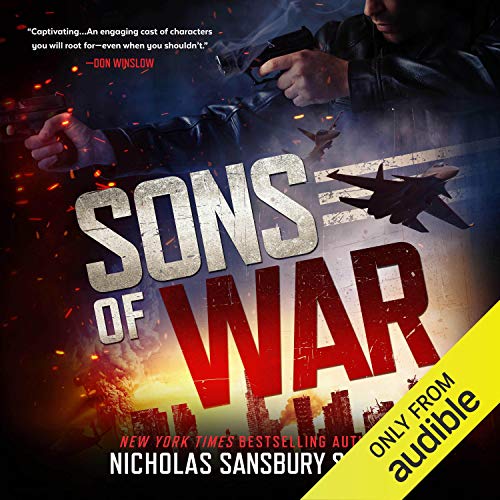 I have a lot of thoughts about this book. First and foremost, this is still very much a NSS book. Smith was able to create a new world, new good and bad guys, but still keep the “feel” that his other books have.  If I were to compare this to another series – it would probably be the Trackers series. It had a similar feel to it along with similar pacing.

Sons of War is a mafia story but one that is set during an apocalyptic event. I loved the event that Smith wrote for this one because it felt extremely real. Like almost too scary real. I don’t want to go into exactly the elements that happen for fear of spoiling anything – but know that there were a few events and then finally a “oh crap” sort of moment that really set off the apocalyptic backbone of this story.

I went into this skeptical (okay, as skeptical as I could be when reading one of my favorite authors).  I’m not always a mafia-story fan, but if anyone is going to make it work it was Smith. NSS is able to bring such realism and so many layers to these characters that you like them… even when you shouldn’t. Each person that you root for has more bad qualities than good and that’s something I’m not used to in a book like this. Usually it’s “they’re all good except this one flaw” where in this case pretty much everyone is a bad guy with one to two redeeming qualities. I’ve never read a book like that before, or at least a book that I liked.

Sons of War is the first book in a planned trilogy and I cannot wait to see where the other books go. But, if you’re one of those people who hate massive and major cliffhangers and incomplete stories – don’t worry Smith has you covered. This story feels complete. Like if it randomly ended her, I’d still have questions but I’d also be okay with that. It had a full story arc and full character arcs in it that makes me happy when finishing a book.

Overall, this book was awesome. It was a blast from beginning to end. The beginning was full of the typical getting to know character moments, but started off with a bang (or lots of bangs in one short moment). The struggles each character and the groups as a whole faced were extremely realistic. And honestly, it just felt like this could and would really happen.  This book was chill-inducing.

I thought that Ray Porter did a fantastic job narrating this story – he brought some realism to the accents and was able to provide a great performance to an already great story.

Out of the embers, a lawless new empire will rise….

Across the world, the United States recalls troops to combat civil unrest after the biggest economic meltdown in history. Marine Sergeant Ronaldo Salvatore’s platoon comes home to a powder keg that could ignite a civil war.

While some see the coming collapse as the end, others see opportunity. Fleeing Naples after rival crime lords decimated his family, Don Antonio Moretti settles in Los Angeles to rebuild his criminal empire. But he is far from alone in his ambitions – the cartel and rival gangs all want the same turf, and they will sacrifice their own soldiers and the blood of innocents to get it.

As open warfare erupts across the states, Salvatore fights his way back to LA, where his son has joined the police in the battle for a city spiraling into anarchy. Family is everything, and the Morettis and Salvatores will do what they must to protect their own. But how far will they go to survive in a new economy where the only currency is violence?

The Bar at the Edge of the Sea (The Watc