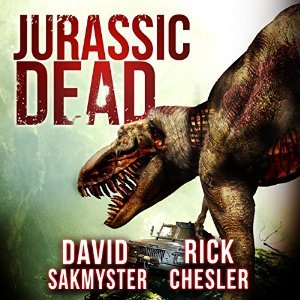 A research team looking for microbial organisms in Antarctica stumbles across a discovery 65 million years in the making.  The find three perfectly preserved dinosaur corpses.  The problem — after the T-Rex thaws out they find that it is missing its heart and one of its lungs.  The even bigger problem — it still wakes up and has an insatiable hunger.

Jurassic Dead was narrated by Andrew Tell who does just a perfect job.  Tell’s voice adds the right amount of drama to some scenes and action to the others.  His pacing and overall delivery make this an audiobook that you don’t want to miss. The scientifically heavy parts were made to sound easy with Tell’s narration.

Jurassic Park was one of my all time favorite books when I was growing up, and it’s still in my top 10 today.  This book has been on my wish-list for a while, and I was excited to dig into it to see what Sakmyster and Chesler had in store for me.  Jurassic Dead has a nice mixture of old and new and even calls reference to Jurassic Park a few times in it.

There were certain parts of the book that seemed to be a little far-fetched, but then again we’re talking about zombie dinosaurs.  So, if I’m going to be upset about far-fetchery (yes, I made up a word) then I should probably move on to another book.  I guess that the hybrid/zombie aspect of it just caught me off guard.  The reader is quickly introduced to these zombified beasts, but they aren’t explained until later.

The main characters were incredibly well thought out and explained.  I always like when you feel like you know a character enough to actually bond with them.  That is definitely the case in Jurassic Dead.  The characters really make you feel.  When they feel scared your heart races, and when they feel hopeless, the reader may need a moment.

Overall, Jurassic Dead was a good book made better by narration.  I can’t tell you enough that a well-narrated book can elevate a book to new levels.  This was truly a performance by Tell and the listener will not be disappointed.

If you were a fan of Jurassic Park (the movies or the books) with a new scientific twist — this book is for you.  Yes, there’s a lot of blood and gore — but what do you expect? They’re zombie dinosaurs.

An Antarctic research team hoping to study microbial organisms in an underground lake discovers something far more amazing: perfectly preserved dinosaur corpses. After one thaws and wakes ravenously hungry, it becomes apparent that death, like life, will find a way.

Environmental activist Alex Ramirez, son of the expedition’s paleontologist, came to Antarctica to defend the organisms from extinction, but soon learns that it is the human race that needs protecting. 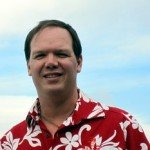 Rick Chesler holds a Bachelor of Science in marine biology and has had a life-long interest in the ocean and its mysteries. A certified scuba Divemaster, when not at work writing he can be found diving, boating or traveling to research his next thriller idea. He currently lives in the Florida Keys with his family. Visit him online at rickchesler.com, facebook.com/rickchesler, or twitter.com/rickchesler. 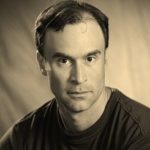 David Sakmyster is an award-winning author who has nine novels published, including a series about psychic archeologists (described as “Indiana Jones meets The X-Files”) starting with the book THE PHAROS OBJECTIVE. He also has an epic historical adventure, SILVER AND GOLD, the suspense novels CRESCENT LAKE, BLINDSPOTS and N.D.E, and a forthcoming story collection, ESCAPE PLANS. His screenplay, Nightwatchers, has been optioned for production. Visit him at www.sakmyster.com.