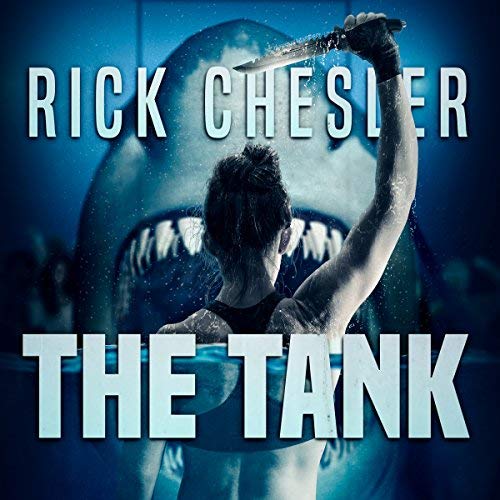 Can you survive 5 minutes in The Tank?

Going into this I knew a few things.  Rick Chesler wrote it, the book itself was released by Severed Press, and that it had a shark on the cover.  Everything else about it (including the synopsis) wasn’t important to me.  I went into The Tank completely blind and found myself to really enjoy it.

Chesler is such a powerful writer that he can really take you to the swamps of Florida just to get to the final scene similar to what’s on the cover. I was smiling from ear to ear along the entire ride.

The Tank follows an escaped felon living on the land trying not to make a name for himself.  He quickly realizes that in Florida people will pay you to remove pests for them.  But unfortunately, it is Florida and those pests are usually alligators.  He quickly starts to make enough money to support himself.  One night he had to hold one of the creatures until the next day — he realized that people would bet to get in with the beast that he was sitting on.   An idea quickly crept into his brain and the brains of his roommates.  Man vs Beast standoffs would quickly become all the rage.

Since Chesler wrote it, I didn’t feel like I was missing anything.  He always gives really good back stories to his main characters.  Enough that you can feel invested in them.  I’m a big fan of finishing a story without having any or many questions.  And The Tank allowed me to do this.

The narration for The Tank was done by Gary Regal who does a great job.  He had the perfect voice for this book and allowed it to flow from chapter to chapter.

Overall, The Tank won’t be for everyone.  Even though Kane tries his best to keep the animals unhurt — there are still scenes with knives and sticks.  And if you don’t like seeing people get hurt — there will probably be too much blood in this.  But… if you enjoy a good time and want to sit back and listen to a book that will make the hours pass like minutes — The Tank is for you. (Also, if you know what you’re getting into with a Severed Press book — this is pretty tame for their books, but it was still really enjoyable).

Inmate Kane Brooks escapes from prison while participating in a program to train as a commercial deep sea diver. When he assumes a new identity in Florida as an alligator wrangler removing nuisance animals from homes and businesses, it looks like he’s found a way to settle down and lay low. But that all changes when a casual backyard gladiator racket turns into an underground empire staging man-versus beast spectacles in a cage-fighting style ring.

After Fish & Wildlife officer Heather Winters is tipped off about the illegal activity and starts to investigate, she goes undercover, posing as a spectator at the matches in order to infiltrate the underground culture. But when Winters gets close to obtaining sufficient evidence to make an arrest, she learns the man staging the contests is not at all who he says he is. When Brooks catches on to her true role, Winters finds herself in the unenviable position of having to face off as a contestant in the ultimate fight card—woman vs. great white shark in… THE TANK.

2 thoughts on “Audiobook: The Tank by Rick Chesler (Narrated by Gary Regal)”