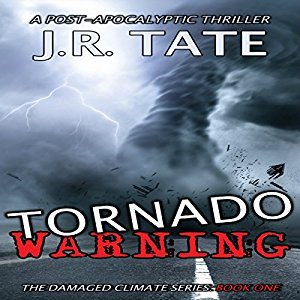 A story of surviving massive storms

I love weather stories.  I took a meteorology class in college because I wanted to learn more about extreme weather.  I also (if you couldn’t tell by my other reviews) love post-apocalyptic books so when I saw that this seemed to combine both of them into one package I was pretty excited.

The story revolves around Ryan and his small town in Texas.  A major tornado hits the town, and then another and another. Things turn from bad to worse in a heartbeat and everything gets turned upside down.  Ryan’s son is injured and his wife is missing. Everything has fallen apart in a matter of hours.

First and foremost — this is a post-apocalyptic book. Not the zombie apocalypse or and EMP strike.  But mother nature unleashing her fury and leveling part of the earth.  It’s not as much about the weather as it is about the survival of one family.   Go into this thinking that you’re going to be watching some of Twister mixed a little with the story part (saving his son) in The Day After Tomorrow and you’ll enjoy it.  If you go into it thinking you’re going to get an in-depth look at what a tornado is and the destruction that it does and you’ll be disappointed.

Tom Kruse’s narration was a little rough.  He definitely over-acted the entire book and it made parts of it hard to listen to.  A tip that some/most audiobook reviewers won’t give you — speed the book up a little.  Sometimes small things that bother me at normal speed go away at faster speeds.  That was the case with Tornado Warning. Kruse’s voice definitely became less of an annoyance and more of a narration at faster speeds.

Overall this floated between a 3 and a 4 for me.  I think that I’m going to rate it closer to a 4 because I enjoyed the heck out of this book.  It was a different post-apocalyptic story and I liked the characters and their interactions.

In the blink of an eye, the small Texas town of Harper Springs is flattened by the worst tornadic system to ever hit the area. Homes are demolished, trees are uprooted, and people are left for dead.

Taking cover in a cellar with his son, Ryan Gibson narrowly escapes the storm and gets separated from his wife. He hopes that help will come fast - his child is severely injured and the crippling weather pattern rages on, making them pawns in Mother Nature's game.

Weeks pass with no sign of another human being. Tornadoes continue to hammer away at the already ravished land. Ryan wonders why they have been forgotten. Basic survival skills set in - their food rations get smaller, their water intake less, and their limited resources will soon be gone. With his son's fading health and his wife still missing, he will have to make a decision soon - leave their shelter and risk death, or stay patient and hold out hope that a rescue team is on the way.

A harsh truth will soon be revealed - the tranquil way of life in Harper Springs will never be the same.

One thought on “Audiobook: Tornado Warning by J.R. Tate (Narrated by Tom Kruse)”