First and foremost, I like the change of pace from Baron’s other books. Sure, they both involve people in space to start, but Daisy’s Run was a far different book (more pure Sci-Fi). The other thing that I liked was the fact that even though the story is much different – Daisy’s Run still maintained a similar humor-to-serious ratio. The overall book was serious and dealt with a lot of stuff, but there were a lot of funny moments sprinkled within.

If you’re a fan of other Sci-Fi TV shows and series – you’ll find a lot of references in Daisy’s Run. One of them (the one the cracked me up the most) was the reference to where Daisy thought that Barry got his name (the rogue AI in Archer though its never referenced “officially”). I already had an Archer’s version of Barry in my head when that name was mentioned, but then a few moments later Daisy made a joke about wondering if an old TV Show was where he got his name. There are a ton of other references as well but the only other one I’ll mention was the ships onboard AI was MAL (similar to HAL from 2001).

Daisy’s Run goes through a lot of the emotional spectrum for the reader. I ended up really liking how many different feelings Baron was able to make me feel. There were times when I felt hopeless and then times that I felt pure joy and elation — all feelings that Daisy was going through and all things that don’t always stand out in a book.

I can’t talk much about the aspects of the book that I liked and the different twists and turns that Baron added in due to spoilers but I can say that I did not see it coming. I tried guessing and I even tried to second guess my guess, but it definitely had a nice moment that caught me completely off guard.

Overall, a great narration adds to an already great book. If you’re a Sci-Fi fan or just a fan of well written stories with well hashed out characters – this book is for you. Thankfully, I have the second book to read right away so I can continue the journey and figure out just what is going to happen to Daisy and her crew. 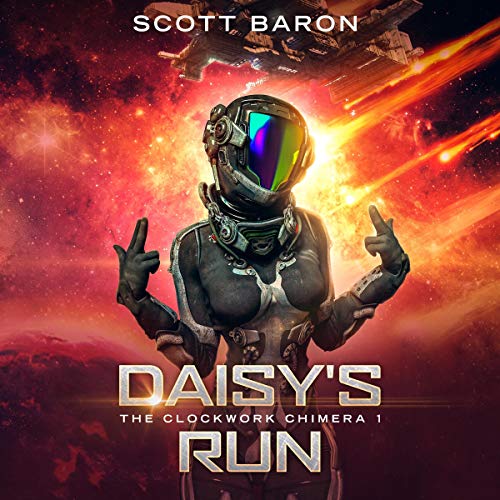 Rudely yanked from cryo-sleep to find herself among a crew of modded humans in deep space, and on a burning spaceship, no less, Daisy’s world just got a whole lot more complicated. And it was only going to get worse.

As if the creepy cyborg and the mechanically-enhanced human crew weren’t bad enough, what was supposed to be a simple flight home to Earth was going horribly wrong. A deadly plot was unfolding. One that could jeopardize the entire human race. And Daisy found herself stuck in the middle.

It wasn’t her job, saving the world, and she sure as hell didn’t want it. But the snarky young woman didn’t have a choice. But with Daisy reluctantly coming to the rescue, would humanity even stand a chance?