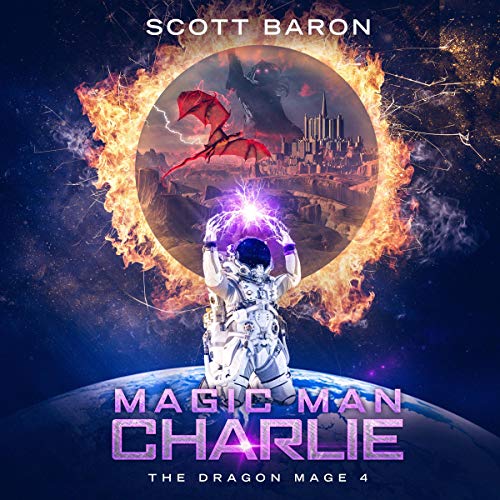 Love This Series! I Can’t Wait To Read More

The fourth book in the Dragon Mage series was easily the most “serious” of the group so far.  I say know fully knowing that it was still funny and entertaining like the other three books. But the consequences in Magic Man Charlie were much more dire if they didn’t get out of the jam they were in.

Magic Man Charlie was easily one of the most riveting in the series since book one (where everything happens and it’s a lot of “wtf is going on here?!”). Magic Man was one of those books that if I walked away from it for a moment I couldn’t wait to dive back into it. I just wanted to know what was happening and what was going to happen.  Baron had me glued to my seat and asking tons of questions as the story progressed.

The main crew of characters were all here in Magic Man Charlie and they have similar roles for most of the book – but there was a lot of growth as well.  Each character seems to be going through their character arcs at a different speed and a couple of characters seemed to hit their “aha” moments in this one. It’s nice since real people don’t all grow and change at the same speed. I like that throughout each book in this series a new person learns something about themself and ends up being a different and better character because of it. Of course, Charlie who is learning the most in every story is also growing the most, but it’s nice that the characters that are there to help him along the way are also growing from these experiences as well.

Magic Man Charlie felt the least Fantasy and the most… Pre-Apocalyptic book in this series. Sure there was still a lot of magic (and tech magic) in this one, but the main story follows more of a “we need to stop this or everyone could die” sort of plot. These kind of stories also speed up the character development that I mentioned above.

Overall, this series is great. Gary Bennett crushes the narration and each book has its own unique feel to it while also building on what the last book has. It’s been a blast to read so far and I can’t wait to read more.

Like poop on your shoe, bad luck had a knack for sticking Charlie wherever he went. And it sure did stink.

Wormholes to a distant galaxy? Done it. Alien slavery? Yup. Forced gladiatorial combat? That too. Space pirate and eventual rebel leader? Check. Rising to the pinnacle of power as Dragon King? Uh-huh.

Charlie, it seemed, had seen and survived it all, and at long last it looked like he’d finally earned himself a little peace and quiet. That is until a whole new threat reared its ugly head. Now, not only were those he held dear at risk, but the entire planet, and possibly even the whole damn solar system.

Yet again, Charlie was in the right place at the wrong time, finding himself forced to evolve into something new. Something more. But this time, on this tech-driven world, the space engineer from the past thought he might finally have the advantage.