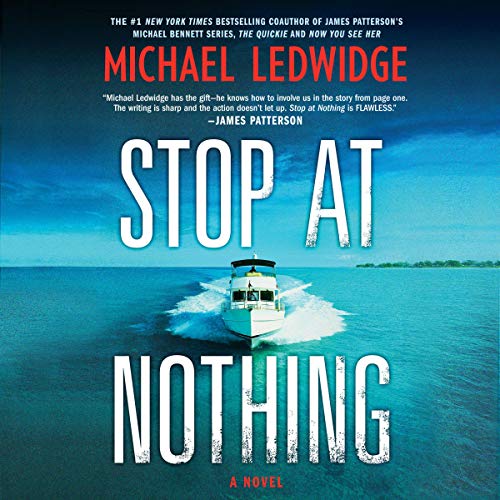 I’ve my eye on this one since it was announced. I wanted to check it out without even reading the description. The title and cover really drew me in. But then, the synopsis really sold me on it.  Michael Ledwidge writes a story about shadow government agencies and the lengths they’ll go to keep something hidden.  Michael Gannon is one of those unsuspectingly fun main characters to follow. He had this way about him that really made following him and his story interesting. He was flawed enough that you knew he was human but also had a lot of traits and aspects of his life that made him really interesting.

Stop At Nothing is the perfect title for this. It really felt like the bad guys were going to stop at nothing to find Gannon and get their goods (and secrets) back.  It was one of those “dark/shadow” government type books and even though those can be overdone or super stereotypical I thought this one was well done. Ledwidge made the story behind everything interesting and sound enough that it was all believable without being too hyperbolic.

Overall, I really enjoyed Stop At Nothing – I flew through it and finished it in a couple of days.  Ledwidge definitely knows how to build characters, worlds, and write a story that keeps your attention to the last moments of it. If you like other books like this (as listed James Patterson, Lee Child, David Baldacci) you’ll definitely enjoy this one.

When a Gulfstream jet goes down in the Bahamas carrying a fortune in cash and ill-gotten diamonds, expat diving instructor Michael Gannon is the only person on the scene. Assuming himself the beneficiary of a drug deal gone bad, Gannon thinks he’s home free with the sudden windfall, until he realizes he forgot to ask one simple question.

Who were the six dead men on the plane?

Gannon soon learns the answer to that fateful question as he is thrust into an increasingly complex and deadly game of cat and mouse with a group of the world’s most powerful and dangerous men who will stop at nothing to catch him.

But as the walls close in, Gannon reveals a few secrets of his own. Before he retired to the islands, Gannon had another life, one with a lethal set of skills that he must now call back to the surface if he wants to make it out alive.

As a decade-long James Patterson writing partner, Michael Ledwidge is a pro at writing fast-paced, in-the-moment prose, tightly choreographed action set pieces, and plot twists that drop at exactly the right moment. With this novel, he kicks off an unstoppable, gripping new thriller series.

Audiobook: Monsters in the Clouds by Rus