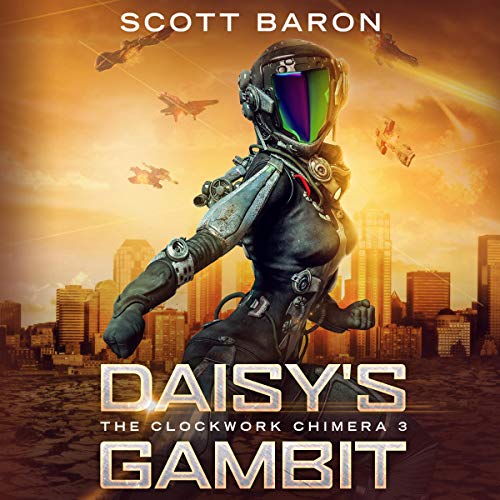 Daisy’s Gambit, the third book in The Clockwork Chimera series starts off where the last book left off (obviously). There is a little bit of a reminder of everything that happened but not enough to completely side track the story. Baron jumps right into this one – taking Daisy into the heart of Montana in search of one of the missile silos.

As with the first two books in this series – this one starts off fast and never lets off of the gas pedal. Baron is able to weave in really great storytelling into the action scenes and each action scene allows the story to progress along and you don’t feel like you’re gasping for breath either. Every time I think that he’s going to let up he doesn’t, but he also allows the reader to prepare for it when there is a slight lull.

I couldn’t have predicted where this book was going to go even if I’d tried. Baron completely shocked me with Daisy’s Gambit and I loved every minute of it. He was able to pull the wool over my eyes and I’m okay with that. The ending was awesome and I would be happy if it ended here (but I know it doesn’t). I like when a book like this has a real ending even though the series is still going.

Overall, a really enjoyable book and probably my favorite in the series. Similar to Baron’s other series but different enough to feel new. The thing that really shines in every Baron book I’ve read is his characters. He’s able to write them so they jump off the page. Daisy is great, she’s feisty, smart, and thinks on her feet. She’s a great protagonist and easily one of my favorite characters.

The narration by Vivienne Leheny really shines in the third book – allowing her to voice more characters along with the ones that we’re already familiar with. She’s the perfect voice for Daisy and really helps this already great book shine brighter.

Her moment of triumph was finally at hand. Or at least that’s what Daisy thought before everything flipped on its axis and went to straight to hell. But that was par for the course in Daisy’s life, and she was becoming somewhat accustomed to expecting the unexpected. This, however, took it to a whole different level. One far worse than she would ever have thought possible.

With her home in jeopardy, her loved ones in harm’s way, and her plans for all of their survival in doubt, Daisy once more found herself forced to step up and take charge, fighting the hard battle she so desperately wanted nothing to do with.

Unfortunately, the alien forces that had devastated her planet seemed to be much more of a threat than she had ever realized, and if she didn’t move quickly, whatever fleeting victories she had achieved in the past would soon be negated by her losses in the near future.

With a rag-tag team of scrappy survivors, Daisy reluctantly set out on what was her most difficult and audacious effort yet. But if she somehow succeeded, she might just save not only her own world, but others’ worlds as well.