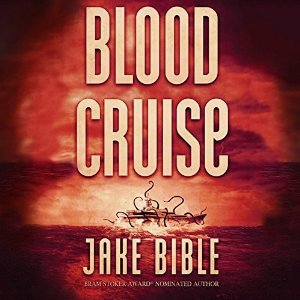 A Deep Sea Terror Is On The Loose

Ben Clow, the stories protagonist is one of the unlikely heroes.  He’s been up against bad guys in his life as a Rounder.  But he thought that he put that life behind him and now just blogs about poker.  But, Ben is quickly thrown into the fire when their simple poker game on a ritzy boat (yacht) starts to go south.

Andrew Tell is quickly becoming one of my favorite narrators.  His use of different voices for different people and the execution of this makes each and every story feel like it’s own.  But, Tell is also able to make each story flow with such ease.

This story is nuts! I wasn’t sure exactly what was going to happen when I first started it, but Bible was able to write two stories that interconnected into one awesome story.  I found myself sitting in my car numerous times when I was home trying to get further into the story.

The main antagonist of the story seems to be the sea creature that I will not write much about.  This creature is really well explained and even believable with the way that it’s written about.  Let’s just say that I would be absolutely terrified. It absolutely terrorizes the group of people and feels never ending.

The story felt like a combination of a lot of other stories and movies that I enjoy.  I won’t list them, but believe me, when I say that if you like “deep seas” movies like Jaws and Deep Blue Sea, you will enjoy this.  Also, if you enjoy James Bond movies (especially Casino Royale) this book will definitely be enjoyable for you.

Jake Bible, Bram Stoker Award nominated novelist, short story writer, independent screenwriter, podcaster, and inventor of the Drabble Novel, has entertained thousands with his horror, sci/fi, thriller, and adventure tales. He reaches audiences of all ages with his uncanny ability to write a wide range of characters and genres.

Jake is the author of the bestselling Z-Burbia series set in Asheville, NC, the bestselling Salvage Merc One, the Apex Trilogy (DEAD MECH, The Americans, Metal and Ash) and the Mega series for Severed Press, as well as the YA zombie novel, Little Dead Man, the Bram Stoker Award-nominated Teen horror novel, Intentional Haunting, the ScareScapes series, and the Reign of Four series for Permuted Press.