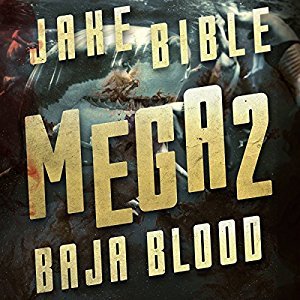 I didn’t read much about the plot before reading this, especially since I enjoyed the first one so much.  Believe me, it is a blast.  If you are a fan of Archer or the other Mega book — this book is definitely for you.

The narration for Mega 2 Baja Blood was done by Lee Strayer who does a great job again.  His narration really moved this story along and allowed me to get lost in it numerous times.  I listened to this on a 2-hour drive (more than my normal 30 minutes to work) and it just passed the time perfectly.  Strayer was able to portray all of the different characters with their different nuances and different outlooks perfectly.

I have never read a book that could have been an episode of Archer more in my entire life.  Don’t get me wrong here, I LOVE Archer, and I found myself laughing at it and even comparing characters to the people of Team Grendel.  But, seriously.  If anyone else has read this book and is a fan of Archer… tell me I’m wrong?

Proof, I can hear archer saying this:

Other than the obvious Archer plot.  Mega 2 was fun.  I think that’s what the author was going for.  You can’t have a plot like this without hoping that the reader will enjoy it.  Sure, there are “serious” parts, but I honestly think this book was written more for fun than its seriousness.

Team Grendel is awesome, the dynamics between them always make me laugh.  They are the most random collection of people I’ve ever read, and that’s what makes them awesome.

Overall, Mega 2: Baja Blood was a blast.  Serious fun from a not-so-serious group of ragtag individuals.

Team Grendel is back and this time they have double the monster sharks and double the trouble as a drug cartel and the Mexican Navy are both ready to blow the Beowulf III out of the water! When a top secret, undercover mission goes wrong for one of the company's operatives, Ballantine must call on Team Grendel and the crew of the Beowulf III to take down a drug lord and stop Southern California from being overrun by a new substance more addictive and deadly than any drug on the planet.

But things are never that simple as Team Grendel find they are under siege by cloned Megalodon sharks that developed a taste for the new substance, sending the monsters on a drug fueled rampage of bloody violence along the Baja Mexico coastline! Blood is in the water and the feeding

Jake Bible lives in Asheville, NC with his wife and two kids. Novelist, short story writer, independent screenwriter, podcaster, and inventor of the Drabble Novel, Jake is able to switch between or mashup genres with ease to create new and exciting storyscapes that have captivated and built an audience of thousands. He is the author of the Young Adult horror novels Little Dead Man and Intentional Haunting, as well as the bestselling adult horror series ZBurbia and adult thriller/adventure series, Mega. Find him at jakebible.com. Join him on Twitter and Facebook.