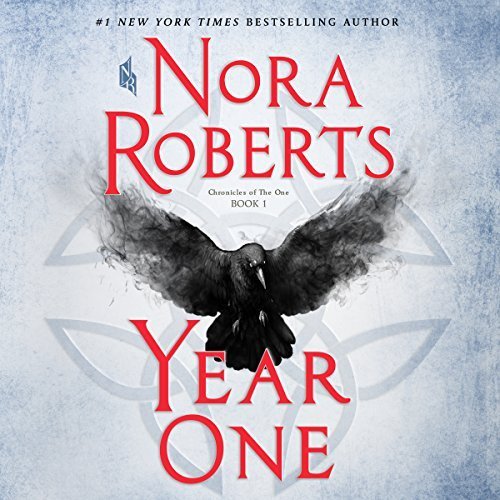 Anxiously Awaiting More In This Series

My grandmother was largely responsible for my reading habit and she was a huge Nora Roberts fan, reading and sharing many of her suspense and romantic suspense novels. When I saw the Publisher’s summary of Year One, I couldn’t resist. I added it to my Audible queue and couldn’t wait to get to it. Having previously been familiar with only a fraction of Ms. Roberts’ work, I was intrigued by Year One’s dystopian foundation and it’s more fantastical elements. It was interesting to see an author I was familiar with delve into a new style though, in all honesty, I’m not sure if it is all that new to her or if it was simply new to me as a (suspense) reader.

This piece was great overall, but at times, it felt a bit like her first foray into the fantasy world. I think it was relatively well executed, in terms of plot, characterization, and setting but I was a bit underwhelmed by the more fantastical elements and found they sometimes seemed like an afterthought. If you’re looking for a dystopian “the virus spread, the government collapsed, now what?” kind of book with some romance and hint of familial drama, you won’t be disappointed.

I’m always interested to see the sociological developments in pieces like this and Year One didn’t disappoint–seeing the way people react in such vastly different ways to the same stressors is fascinating to me and I often find myself wondering what I would do in a similar situation. From the hospital personnel and first responders to the newsroom crews and neighbors, the reactions of these characters felt realistic and sincere.

The last several books I’ve read were a bit slow to start so I found it refreshing when this book opened with just a bit of set up before we jump right into the spread of a mysterious disease. With the first death occurring relatively early on in the book, I was surprised to find that I already felt an emotional connection to the characters and impressed that the characterization drew me in so quickly. I felt invested and looked forward to seeing how everything played out.

As the novel progressed, some of it seemed a bit predictable and unlikely (NYC is a big city, what were the odds some of these folks would really cross paths?) and the end seems a bit rushed to me, but none of this really detracted from my ability to enjoy the story. The magical elements that seemed a slightly out of place earlier in the book also fell into place and added an extra “us versus them” type conflict for the survivors to sort out as they contemplated what their new society would look like.

Overall, I enjoyed the story and found myself googling the series, anxiously awaiting the arrival of book two, especially if the narrator returns. Julia Whelan was wonderful and easy to listen to, even when using different voices–some narrators thrive on this while others sound a bit silly. I thought Ms. Whelan was a master and did a phenomenal job. This was the first narration of her’s that I’ve had the pleasure to listen to and I’m looking forward to enjoying more of her work.

A stunning new novel from the number-one New York Times best-selling author - an epic of hope and horror, chaos and magic, and a journey that will unite a desperate group of people to fight the battle of their lives...

It began on New Year's Eve.

The sickness came on suddenly, and spread quickly. The fear spread even faster. Within weeks, everything people counted on began to fail them. The electrical grid sputtered; law and government collapsed - and more than half of the world's population was decimated.

Where there had been order, there was now chaos. And as the power of science and technology receded, magic rose up in its place. Some of it is good, like the witchcraft worked by Lana Bingham, practicing in the loft apartment she shares with her lover, Max. Some of it is unimaginably evil, and it can lurk anywhere, around a corner, in fetid tunnels beneath the river - or in the ones you know and love the most.

As word spreads that neither the immune nor the gifted are safe from the authorities who patrol the ravaged streets, and with nothing left to count on but each other, Lana and Max make their way out of a wrecked New York City. At the same time, other travelers are heading west too, into a new frontier. Chuck, a tech genius trying to hack his way through a world gone offline. Arlys, a journalist who has lost her audience but uses pen and paper to record the truth. Fred, her young colleague, possessed of burgeoning abilities and an optimism that seems out of place in this bleak landscape. And Rachel and Jonah, a resourceful doctor and a paramedic who fend off despair with their determination to keep a young mother and three infants in their care alive.

In a world of survivors where every stranger encountered could be either a savage or a savior, none of them knows exactly where they are heading, or why. But a purpose awaits them that will shape their lives and the lives of all those who remain.

The end has come. The beginning comes next.

Also by this author: Shelter In Place

2 thoughts on “Audiobook: Year One by Nora Roberts (Narrated by Julia Whelan)”